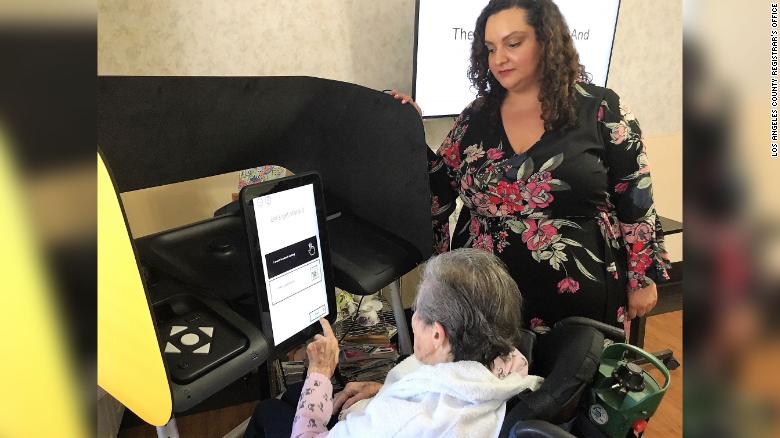 Los Angeles (CNN)Los Angeles County, the biggest voting district in the US, will give voters a new experience during this year's California presidential primary, and critics warn things may not go as smoothly as predicted.

"Los Angeles is the perfect storm," UC Berkeley Professor Philip Stark said about the process and method in which voters will cast their ballots.
"They had a lot of money and the ability to spend a lot. They did not see what they wanted in the market, so they enlisted the help of computer scientists and usability experts with lofty goals of a one-size-fits-all solution to an unsolvable problem," Stark added.
There is a lot at stake for Los Angeles County. With more than 5.4 million registered voters, the end result could be an election model ready to be replicated by counties and cities across the nation or a colossal disaster -- putting in jeopardy millions of votes.
The Voting Solutions for All People system, most commonly known as VSAP, is the country's first publicly owned and designed system. Los Angeles County officials say they continue to make improvements to the system -- a decade in the making and with a price tag of $300 million -- even though it is weeks from when voting in the presidential primary is set to begin.
"There were enhancements being made, tested and reviewed and the secretary of state made the determination that the system complied both with state and federal laws, but it was also ready to be used in this election," said Dean C. Logan, who oversees the Los Angeles County Registrar-Recorder/County Clerk.
On January 24, the VSAP system did receive certification by the secretary of state in California, but with some major caveats. The certification comes with a list of conditions or modifications needed to address technical and security flaws found through testing and mock elections conducted by the county.
At the request of California Secretary of State Alex Padilla, some of these changes will be have to made immediately and before the primary election day, March 3. Others can be done within five months of the "conditional certification."
Officials with the LA County registrar's office assured CNN the problems identified in the reports submitted to the state have been addressed and are constantly being worked on. In an email to CNN, county officials stated that they "will comply with the deadline provided by the Secretary of State's office."
"Our office here in Norwalk has been open since February 3 for early (early) voting and we have not experienced any regular occurrence or disruption related to jams on the Ballot Marking Devices. This further indicates and validates that the modification and enhancements implemented during testing and certification have been effective," said Mike Sanchez, a spokesman for the county registrar's office, via email.
Some of the technical problems that must be solved before the general election include better training for election workers and an improvement on paper jams and misfeed rates that may slow voting. Logan admitted that not all requested changes will be made by the primary but said he is confident that no major issues will arise from them.
Stark has studied the Ballot Marking Devices and is familiar with some of the initial flaws found in the testing phase of these machines. In a January 20 letter to the California secretary of state, Stark wrote that the "system has a number of serious security and usability flaws" and "like all electronic devices, BMDs can be misconfigured and hacked."
"There is no way to catch the errors if they (machines) misbehave," Stark said to CNN over the phone.
The Ballot Marking Devices he refers to are touch-screen tablets that let voters make their selections and then print paper ballots so that they may be reviewed and fed back into the devices. The paper ballots are then pushed to secure ballot boxes on the backs of the devices. According to county officials, the Ballot Marking Devices are not connected to any type of network or internet and the information is not stored on the devices, minimizing the hacking risks.
Rep. Maxine Waters, a California Democrat, worries the new system may be complicated for some voters. "While these changes may be straightforward, I am extremely concerned about the lack of information that has been shared with LA County residents, which could lead to confusion for members of our community on Election Day," Waters said in a statement.
Adding to the confusion is the new ability to cast a ballot at any voting center, and as early as February 22. The neighborhood polling places many Angelenos were accustomed to attending on election day have been replaced with nearly 1,000 voting centers. Some of them open for in-person voting on February 22 and others on February 29. With so many choices and start dates, voters will have their work cut out for them in figuring out when and where they will vote in Los Angeles County.
Still, officials at Los Angeles County registrar's office say they are confident that people will show up to vote between the February 22 and March 3 period and that they will be satisfied with the new modernized way of voting.
CNN has reached out to Padilla for comment.