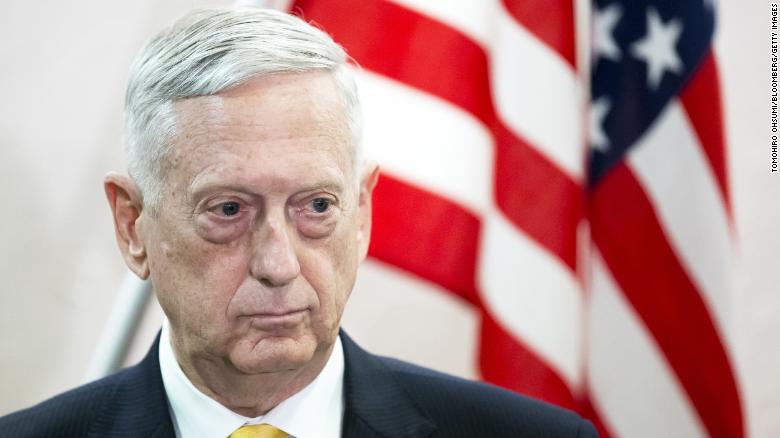 (CNN)The Defense Department cleared an insider account of the Trump Pentagon from Secretary James Mattis' former speechwriter on Wednesday, averting a courtroom battle over accusations that the Defense Department had held up the book's release to benefit the former secretary.

Attorneys for Guy Snodgrass, a former Navy pilot who helmed Mattis' communications team during his tenure at the Pentagon, confirmed to CNN that the Pentagon's classification office had given the green light to their client's manuscript, "Holding the Line: Inside the Pentagon with General Mattis."
"The book has been cleared for release subject to minor redactions," Brad Moss, an attorney for Snodgrass, told CNN over the phone.
In a brief letter dated Wednesday, the chief of the Pentagon's classification office notified Snodgrass that the department had inserted several "re-written" chapters in place of the author's original words.
Snodgrass sued the department last month, accusing Pentagon officials of breaching his First Amendment rights. The complaint cited numerous sources who claimed the delay was retribution for violating an unspoken loyalty oath to the secretary. The filing also accused Mattis of "complicity" in blocking the book from publication, in part so the former secretary's own book would hit bookstore shelves first.
The resolution followed a fireworks-free hearing in federal court Monday at which Snodgrass and Justice Department officials had indicated they were close to resolving the issue.
The lawsuit detailed a contentious back-and-forth between Snodgrass and Pentagon officials, including stern warnings from department lawyers that the former speechwriter had neglected his "duty to protect the confidences of Secretary Mattis."
According to the complaint, word of the book provoked an email from Mattis himself, in which the former secretary wrote that his onetime aide appears "to be violating the trust" of senior Pentagon officials that he would keep private deliberations private.
What events the books retells remain closely guarded inside the Pentagon. Snodgrass' attorneys said they have not seen their client's manuscript, as is typical in the classification review process.