Lawmakers have introduced a bill that would make it easier for student loan borrowers to cancel their debt in bankruptcy.

The measure, which is supported by 14 Democrats, one Republican and one independent, is dubbed the Student Borrower Bankruptcy Relief Act of 2019.

"Americans struggling financially should have the option to discharge their student loans during bankruptcy as a last resort," said John Katko, R-New York. "This bipartisan legislation makes that change."

A number of consumer advocacy groups, including Americans for Financial Reform, the National Consumer Law Center and the Center for Responsible Lending, praised the bill.

"It's important to have legislation that will provide vulnerable student loan borrowers who cannot repay their debt with a pathway to reestablish their financial stability," said Cheye-Ann Corona, a senior policy associate at the Center for Responsible Lending. 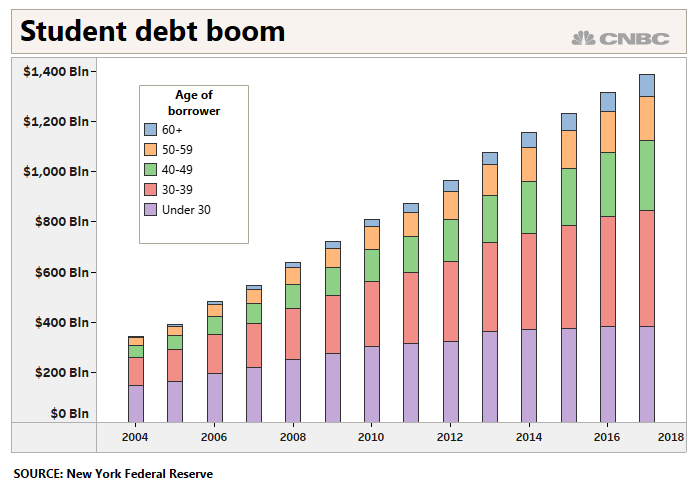 The country's outstanding student loan balance is projected to swell to $2 trillion by 2022, far surpassing credit card or auto debt, and experts say a large portion of it is unlikely to ever be repaid. More than a quarter of borrowers are in delinquency or default. Student borrowers owed $33,310 on average in 2018, according to the latest figures available from the Institute for College Access & Success.

In the 1970s, policy makers and pundits raised concerns that students would rack up a bunch of loans and then try to discharge them after graduation. As a result, lawmakers added a stipulation that student loan borrowers would have to wait at least five years after they began repayment to file for bankruptcy. In 1990, that waiting period was upped to seven years. Almost a decade later, the rules changed again, and now people with federal or private student loans can walk away from their debt in bankruptcy only if they can prove their loans pose an "undue hardship."

"What one judge feels is an undue hardship may be a simple hardship to a judge across the country, or in the same circuit, or even in the same building." -Stanley Tate

Congress, however, never spelled out what that term means, and lawyers and advocates say the uncertainty leads to unfairness in the courts.

Four law scholars recently called on the U.S. Department of Education to establish clear rules around when borrowers are eligible to discharge their student debt in bankruptcy. They call the current standard "notoriously subjective and draconian."

Stanley Tate, a student loan lawyer in Missouri, said the ambiguous definition makes it almost impossible to advise student loan borrowers on whether it would be worthwhile for them to file for bankruptcy. "What one judge feels is an undue hardship may be a simple hardship to a judge across the country, or in the same circuit, or even in the same building," he said.

Last year, Federal Reserve chairman Jerome Powell said that he was "at a loss to explain" why student loans are treated differently than other types of debt in bankruptcy.

"Bankruptcy protection should have never been taken away from student loans in the first place," said Alan Collinge, the founder of Student Loan Justice.

Yet Nick Simpson, the vice president of public affairs at the Consumer Banker's Association, said the bill would do more harm than good.

More student loan discharges would mean a higher bill for taxpayers, he said, and private lenders would likely raise their interest rates if they knew borrowers could cancel their loans. "Lenders are going to have to factor that in," he said.

Lenders would likely be more willing to provide struggling borrowers accommodations if bankruptcy discharge was available, he said. And, more simply, he said, some borrowers can't repay their debt and should have the option. "Both federal and private student loans should be dischargeable in bankruptcy, without any exceptions," he said.

Concerns that droves of student borrowers will seek to ditch their debt have always been overblown, Kantrowitz said. Prior to 1976, when the loans could be cancelled in bankruptcy like other types of debt, less than 1% of it actually was.

Although, he said, there would likely be a temporary spike in filings following the change.

"There may be some pent up demand," he said.

More from Personal Finance:
Your child's sports could be sabotaging your finances
Here are the best and worst jobs of 2019
Retirees are flocking to these hot spots