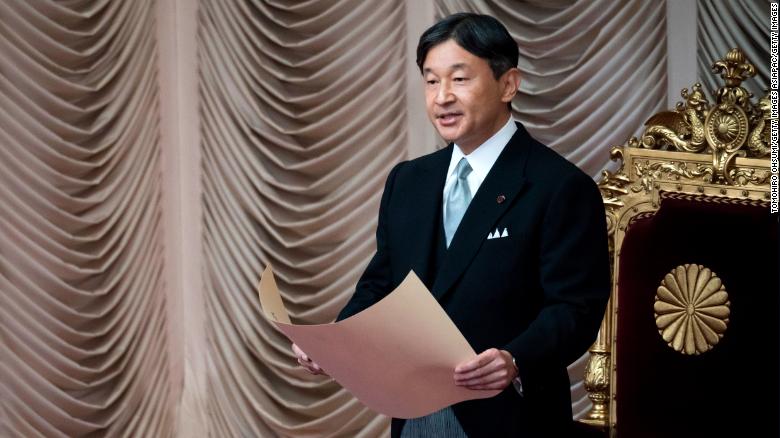 Japan's Emperor Naruhito gives an address during the opening of the 200th extraordinary Diet session at the Upper House of the Parliament on October 4 in Tokyo.

(CNN)More than half a million petty criminals will be pardoned in Japan next week to mark the enthronement of Emperor Naruhito, the government announced Friday.

However due to extensive damage caused by Typhoon Hagibis, the imperial procession -- during which the Emperor and Empress Masako were to be paraded before the public in a Tokyo motorcade -- has been postponed.
About 550,000 people will be given amnesties for their crimes to encourage criminals to "reform and rehabilitate," Chief Cabinet Secretary Yoshihide Suga said.
Naruhito ascended to the Chrysanthemum Throne in May, becoming the 126th Emperor of Japan and ushering in the new Reiwa era. His father, former Emperor Akihito abdicated a day earlier, becoming the country's first monarch to step down in two centuries. 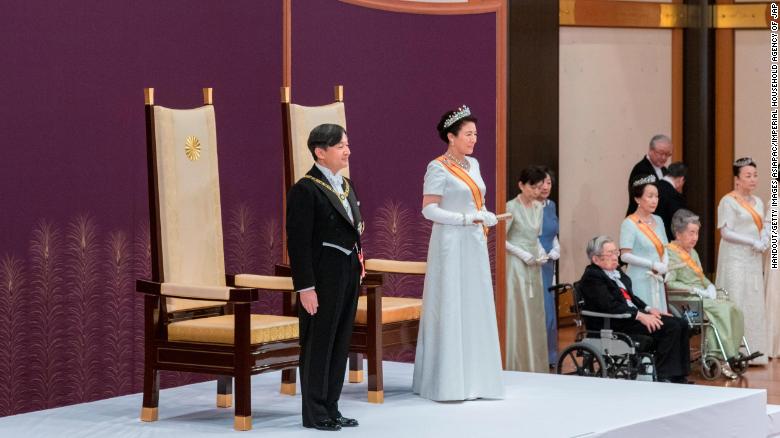 New Japanese Emperor Naruhito delivers his first speech after ascending the throne during the enthronement ceremony at the Imperial Palace on May 1, 2019 in Tokyo.
Naruhito will celebrate his enthronement on Tuesday in a ceremony at the Imperial Palace attended by dignitaries from 174 countries and international organizations, followed by a series of banquets. But the public parade -- the 4.6-kilometer (2.9-mile) route from the Imperial Palace to Akasaka Palace -- will instead proceed on November 10 as the nation reels in the aftermath of Hagibis.
Five days after it swept over the country, the death toll stood at 78 on Friday, with nine still missing and thousands of residents in rescue shelters or without power, according to public broadcaster NHK.
About 110,000 personnel are still deployed from the fire department, self-defense force and police to aid in search and rescue efforts, Suga said. Postponing the parade, which would require a large deployment of security forces, allowed them to remain focused on rescue efforts.

The 550,000 pardons will be awarded to people found guilty and fined over minor offenses including traffic violations, theft and election fraud, provided they paid the penalty at least three years ago, Kentaro Tanaka, from the Ministry of Justice's Rehabilitation Bureau, told CNN. People whose conviction was difficult to implement -- due to ill health of financial difficulties -- might also be included, he said. However those who committed serious crimes will not be considered.
Under Japanese law, criminals must wait five years after being convicted for a minor offense or paying a fine before can sit exams and get national licenses, Tanaka said. The pardons are expected to lift those restrictions -- although they will not clear the offenders' criminal records. 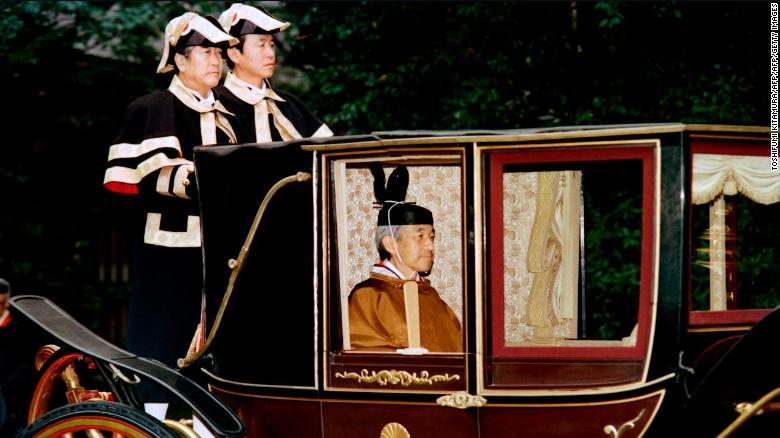 Japanese Emperor Akihito sits in a carriage on his way to perform a ritual to mark the completion of his enthronement on November 28, 1990.
It's not the first time that pardons have been used to mark major events involving the emperor. When Emperor Hirohito -- also known as Emperor Showa -- died in 1989, more than 10 million people received amnesties, Tanaka said. In 1990, another 2.5 million were pardoned to celebrate Emperor Akihito's ascension to the throne, according to a report by Japanese news agency Kyodo News.

The measure remains controversial, however. In a phone interview to CNN, Yukihisa Fujita, former Upper House member for the Constitutional Democratic Party, said the pardons were not appropriate "if the government was trying to take advantage of the celebratory mood surrounding the enthronement to provide politically motivated benefits to certain people."
In the Diet session on October 8, opposition politician and Upper House member Hiroyuki Nagahama questioned whether the pardons were compatible with the separation of powers and principles of transparency, given they will be decided by the administration without any oversight from the judiciary.