(CNN)Stephanie Frappart is set to make football history for the third time in four months, but the French referee is taking it all in her stride.

On Wednesday, Frappart will take charge of the UEFA Super Cup between Chelsea and Liverpool in Istanbul, becoming the first female to officiate in a major men's European match.
Follow @cnnsport
Arguably, it isn't the biggest match Frappart has officiated this summer as the 35-year-old was the referee for the Women's World Cup final between the USA and the Netherlands in July, which perhaps explains why this footballing trailblazer says she is not feeling any added pressure before Wednesday's showpiece match.
"We are not afraid about this game because we are always ready for all of the games," Frappart, who in April became the first woman to take charge of a league match in France's top division, told reporters on the eve of the all-English tie.
Also the first woman to be appointed to France's elite pool of referees, Frappart rejected any notion that it was more difficult to officiate a men's game.
"I think there is not a lot of difference, because football is the same," she said. "Refereeing is the same, football is the same, I would do the same I do in women's football."
Visit CNN.com/Sport for more news, features and videos 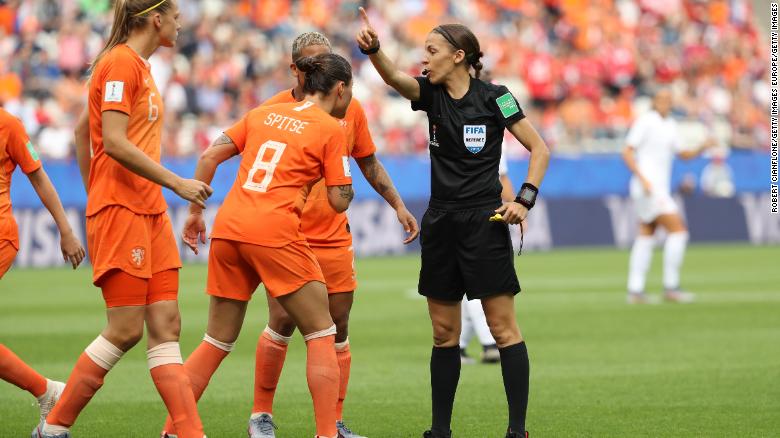 Frappart was in charge of this summer's Women's World Cup final.

Frappart said her "life has changed" since she was appointed by UEFA, European football's governing body, earlier this month as part of an all-female on-field referee team for the match between the winners of last season's Champions League and Europa League.
"I'm now popular all over the world," Frappart explained. "But I was also appointed in Ligue 1, so I know the feelings and emotions and how to manage them and how to train for [the occasion]. This is not my first appointment."
Frappart will be joined by assistant referees Manuela Nicolosi and Michelle O'Neill, who were both also part of July's World Cup final.
O'Neill told reporters that it was "pretty nice" to be "opening the pathway" for future generations.
READ: Istanbul bar owners braced for English soccer fans 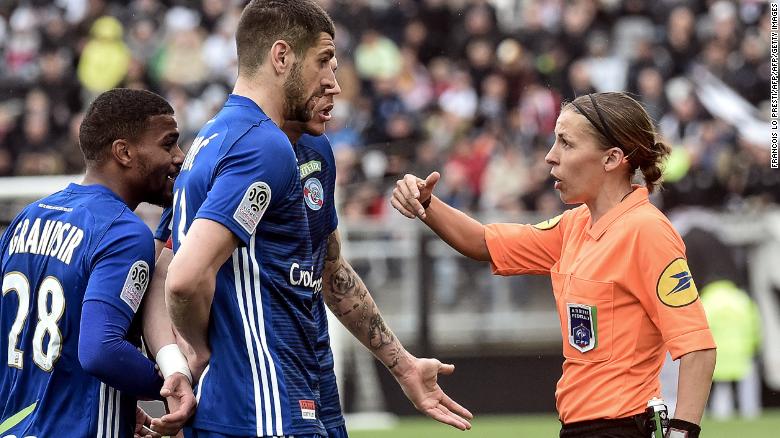 Frappart is the first woman to referee a Ligue 1 match.
Switzerland's Nicole Petignat was the first woman to referee men's matches in European competition, taking charge of three UEFA Cup qualifying round games between 2004 and 2009, while female referees have taken charge of men's league matches.
In 2017 Bibiana Steinhaus became the first woman to referee a top-flight match across Europe's five top leagues when she took charge of a Bundesliga match in Germany.
But there is no question that Wednesday evening in Turkey will be a big moment for women in football.
"Finally it's time," said Liverpool manager Jurgen Klopp, who guided his team to the European Cup in June with victory over Tottenham in Madrid.
"I've had a lot of experience with women referees in Germany. Bibiana Steinhaus is doing it. It took a while before she was considered, not by the professionals but by the referees, to be ready. Meanwhile, she's settled.
"I'm really happy we can be part of that historical moment. There are so many things in the world out there which we are still obviously not smart enough to make the right decisions, so that's a very smart decision that we finally bring a woman to be a referee of a very, very important game, and an important game in front of millions of people."
Chelsea boss Frank Lampard told reporters that Frappart's appointment was "one more step in the right direction."
"I think the game has come on a long way in many ways, in terms of the women's World Cup which we all watched this summer, in terms of how much respect the game's getting, how many people are watching it and the interest in the game," he said.
"I think we were very slow everywhere on this and now we are trying to make strides, and there's still a long way to go but in terms of tomorrow I think it's a huge moment."
Roberto Rosetti, UEFA's chief refereeing officer, said he hoped Frappart would "inspire thousands and thousands of young female referees around the world."
"They are good, they are prepared they are ready," he told reporters. "They are strong, technically, physically, just a few days ago Stephanie passed the men's fitness test with the elite referees."