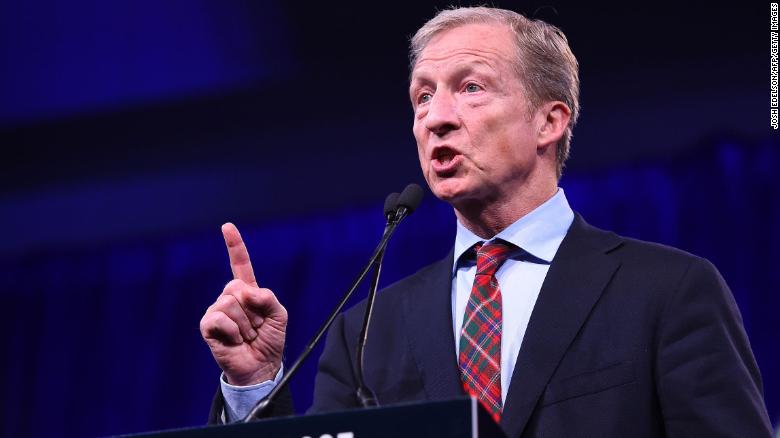 Washington (CNN)Billionaire Tom Steyer raised $2 million in the third quarter of 2019, his campaign announced on Thursday, a paltry haul that pales in comparison to the more than $30 million the candidate has spent of his own fortune solely on television and digital ads for his presidential bid.

Steyer had always planned to self-fund his campaign, but the extent to which his personal wealth is propelling his campaign became clear with the fundraising announcement. The $2 million haul lands the businessman-turned-politician at the bottom of all 2020 Democrats who have announced their third quarter fundraising numbers so far. Campaigns are required to submit their fundraising reports to the Federal Election Commission by October 15.
Steyer has spent more than $30 million across television, Facebook and Google in just three months of his presidential campaign, according to the latest available data, a staggering figure that dwarfs any other Democratic campaign.
That figure is just on ads, too, and a Steyer spokesman declined to comment on how much the candidate has personally spent total on his campaign. But aides have told CNN that the candidate is prepared to spend upwards of $100 million on his campaign.
Steyer's fundraising has been almost entirely online, according to the campaign, propelled by digital ads featuring the candidate and a large email list. Steyer's campaign received donations from 166,119 unique donors, for an average donation of $12.
Steyer did not host fundraisers for his campaign and has declined to take money from corporate PACs.
After initially declining to run for President, Steyer entered the race in July, far later than any other 2020 Democrat. Campaign manager Heather Hargreaves said in a statement on Thursday that Steyer's "late entry into the race meant that we needed to move swiftly to catch up with the other candidates who have been running since last year."
"We built an organization in the early states quickly and have been using a wide-array of communications platforms, and we can see definitively that Tom's message of breaking the stranglehold corporations have on our democracy is resonating with voters," Hargreaves said.
The spending has led to results for Steyer. Unlike a number of his Democratic opponents, the businessman has qualified for the October debate hosted by CNN and his campaign says he has also qualified for the Democratic debate in November.
Steyer has long been a staple in Democratic politics, bankrolling a host of organization and candidates for decades before he decided to run himself. Steyer's net worth reached $1.6 billion this year, according to Forbes, a fortune he began amassing in 1986 when he launched his hedge fund Farallon Capital.
Steyer's personal spending has not been welcome news by other Democrats, many of whom has slammed the candidate using his personal wealth to get onto the debate stage.
In a fundraising email titled, "Buying your way onto the debate stage," former Rep. Beto O'Rourke's campaign said Steyer has "succeeded in buying his way up there."
Vermont Sen. Bernie Sanders, who often rails against billionaires and money in politics, said in July that he is "tired of seeing billionaires trying to buy political power."
And New Jersey Sen. Cory Booker said in a recent fundraising email that Steyer's money is "hard to compete with" and lamented the fact that Steyer has the "ability to spend millions has helped him gain in the polls like no one else in this race."