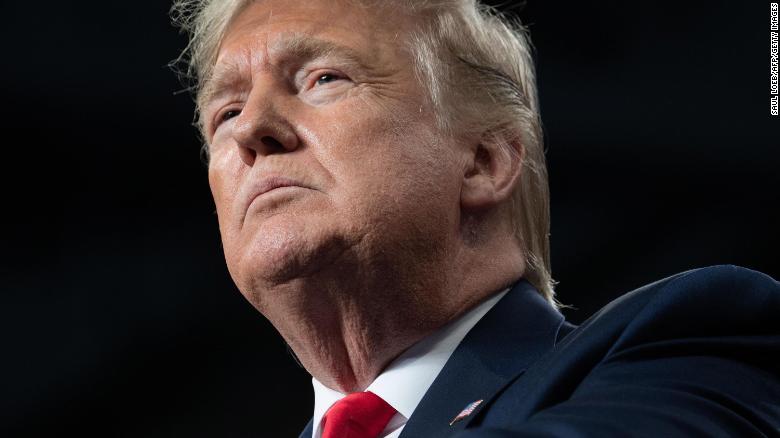 (CNN)Much of the attention to our new CNN/SSRS poll will rightly focus on the fact that a majority (51%) of Americans want the Senate to convict and remove President Donald Trump from office. It's an amazingly high number when put in the context of past impeachment sagas.

Yet, to me, the most important numbers revolve around Trump's approval rating. Those data points suggest that the President is not in a bad position for reelection.
Trump's approval rating among voters stands at 45%. That's no worse than it was a month ago (44%). It's the highest it's been among voters since July. Prior to that, you'd have to go all the way back to March 2017 to find anything as high.
This suggests that Trump's impeachment has not affected how people feel about him overall. That shouldn't be surprising, given how few voters care about impeachment.
Dig into the numbers deeper and you find some actually encouraging news for the President. His approval rating in the battleground states (i.e. the 15 states with the closest margins in the 2016 election) is at 48%. His disapproval rating in the same states is 48%, which makes for a net approval rating of 0 points.
To put this in perspective, Trump won these states in aggregate by only a point in 2016.
His net approval rating suggests the political environment in these places really hasn't shifted too much over the past three years.
Indeed, Trump's net approval rating last month in these states was -2 points. The movement from -2 points to 0 points is statistically insignificant. It does back up the idea, though, that impeachment hasn't really hurt the President.
Trump's numbers in our poll are eerily like those in a recent Marquette University Law School poll out of Wisconsin. That poll put the President's net approval rating at 48% among voters, with a disapproval rating of 49%. Wisconsin was the tipping-point state in 2016, which essentially means it was the most important state in securing Trump his Electoral College majority. If he wins Wisconsin again, he'd be in a good position to win reelection.
Of course, elections aren't just about voter preference. They're about enthusiasm, too, because enthusiasm correlates with turnout.
Trump's approval rating is 54% among voters in the battleground states who are at least very enthusiastic. His disapproval rating among those voters is 45%, which puts his net approval rating at +9 points among them. Last month, it was +10 points. These two results are within the margin of error of each other.
Trump is doing his best among enthusiastic voters nationally, too. His approval rating is 49% with those who are at least very enthusiastic. His approval rating is 51% among those who are extremely enthusiastic. Last month, it was a similar 48%.
Now, none of these numbers means Trump is necessarily a favorite for reelection. Plenty of unethusiastic voters will cast ballots, and the battleground states are close.
Still, our poll continues to tell a complicated story. Trump may not be liked by Americans, and a majority may even want him thrown out of office. But he still could easily win reelection.