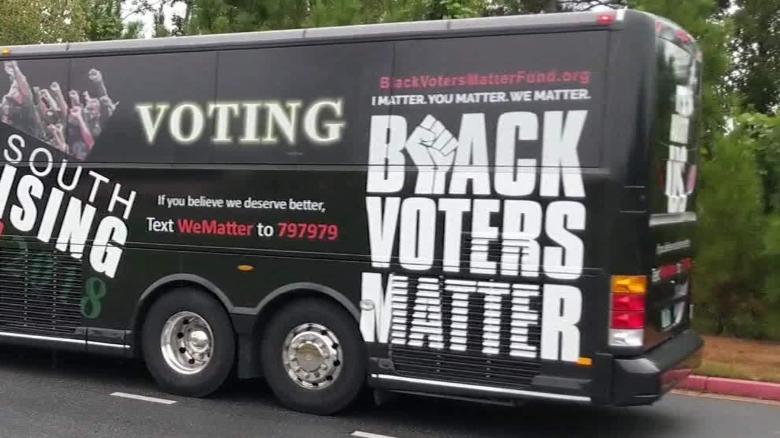 (CNN)First things first: The theme song of the week is the Boy Meets World closing credits.

Poll of the week: A new national Fox News poll finds that among black Democratic primary voters, former Vice President Joe Biden is their first choice for the party's presidential nomination at 37%. He is followed by Vermont Sen. Bernie Sanders at 18%, California Sen. Kamala Harris at 10% and Massachusetts Sen. Elizabeth Warren at 8%.
The Fox New poll is the latest to show that Biden holds a large lead among black voters in the Democratic primary.
What's the point: This polling might give you the sense that Biden will be a heavy favorite among those attending the predominantly black Young Leaders Conference this weekend. After all, just look at his lead among black Democrats nationally. Yet, our last three CNN polls (April, May and June) aggregated together reveals that younger black voters aren't as enthusiastic about Biden's candidacy as older black voters are.
Overall, our last three CNN polls have Biden at 44% among black voters. No one else is anywhere close; Harris is in second at 14%. Biden's big league advantage in these polls is similar to the Fox News poll.
However, Biden's standing drops to 36% among black voters under the age of 50. This is lower than the 51% he has among black voters aged 50 and older.
We don't have a large enough sample size to break it down further than that, but we can model it out using age and race as predictors. Our model suggests that Biden's support probably drops to below 30% among voters under the age of 30. It also suggests that the former vice president's support is likely closer to 60% among black voters age 70 and older. That is, his support probably doubles between the youngest and oldest Democrats.
Such a split within the black community shouldn't be surprising. Back in the 2016 Democratic primary, the age gap was huge. Hillary Clinton won the black vote with somewhere around 75% in 2016. This large vote share came primarily from black primary voters older than 30. She took 70% among black voters ages 30 to 44, 85% from those ages 45 to 59 and 89% from those 60 years and older. Blacks under the age of 30 actually went for Sanders by a 52%-to-47% margin.
This year, Sanders isn't benefiting from quite the same age gap, though an age gap still exists. He stood at 9% with all black Democratic primary voters in our CNN polls from April to June. Breaking it down by age, he does do better with black Democrats under 50 (12%) than those 50 years and older (6%). Using the modeling technique that we did with Biden, we can estimate that Sanders likely has somewhere between 15% and 20% support with black voters under the age of 30. Our model indicates it's probably well under 5% with black voters over 70 years old.
No other candidates generate the same sort generational split within the black community. Harrris is at 14% among those age 50 and over as well as those under 50. Warren is at 12% among those age 50 and over and at 9% among those under 50.
This age gap is partially a reflection of party identification. Biden does better among Democratic black primary voters who self-identify as Democrats than he does among those who call themselves independents. For Sanders, it's the reverse -- just as it was in the 2016 primary.
Younger black Democratic primary voters are much more likely to call themselves independents than older ones, according to an aggregate of the last three CNN polls. Among black Democratic primary voters under 50 in our aggregated dataset, 68% say they are Democrats. About a third (32%) say they are independents. For those older than 50, 86% call themselves Democrats. Only 14% call themselves independents.
The fact that older and younger black Democrats are more likely to call themselves Democrats than independents works to Biden's benefit. Biden's hoping that this loyalty to the Democratic brand helps propel him among black Democrats of all ages. So far, it has, though more so with older black Democrats.