(CNN)A lawyer says his client shot and killed a Black Lives Matter protester in Austin, Texas, last Saturday because the man began to raise an assault rifle at his client, the lawyer said in a news release issued Friday.

The lawyer, Clint Broden of Dallas, identified his client as Daniel Perry and said he was an active duty sergeant in the Army. Broden said he was releasing Perry's name in an attempt to correct misinformation in the media. 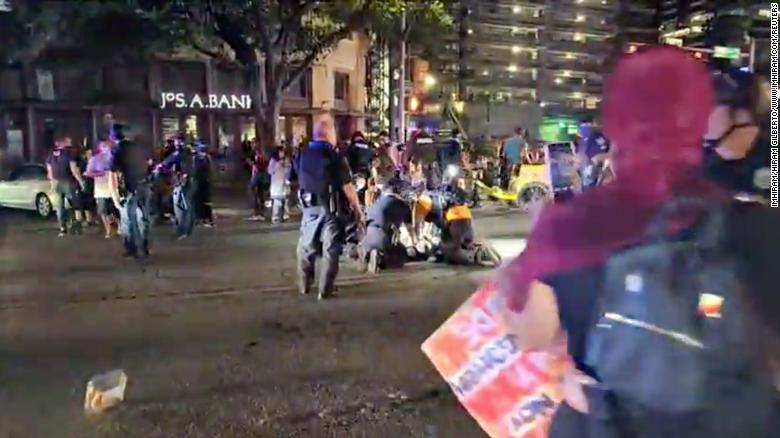 One dead after shots fired during protests in Austin
Last Saturday night, Perry was working as a driver for a ride-share company to make extra money and had just dropped off a client when he encountered the protest on Congress Avenue, the release said.
Perry did not know the protest was taking place before turning onto Congress Avenue, the release said.
People began beating on the car and a man now identified as Garrett Foster approached, carrying an assault-style rifle, and motioned for Perry to lower his window, the release said. Thinking the man was associated with law enforcement, Perry did so but then realized the man was not a law enforcement officer, the release said.
"It has now been confirmed by several witnesses that this individual with the assault rifle then began to raise the assault rifle toward Sgt. Perry," the news release said. "It was only then that Sgt. Perry, who carried a handgun in his car for his own protection while driving strangers in the ride share program, fired on the person to protect his own life."
Somebody else fired on Perry's vehicle and he drove to safety and called police, the news release said. 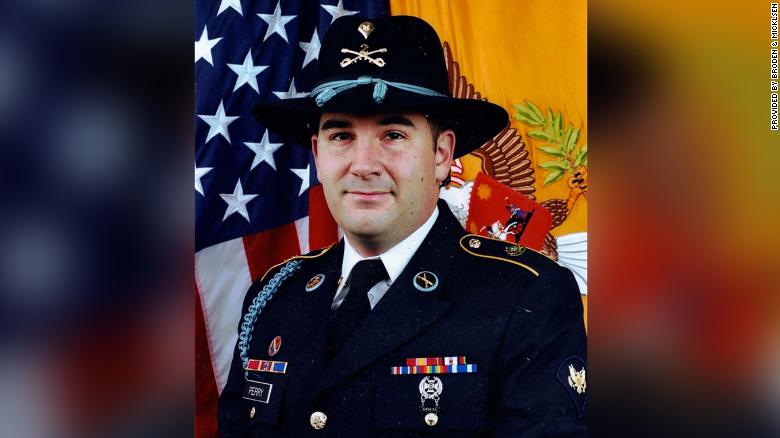 An undated photo of Sgt. Daniel Perry provided by Broden & Micklsen, the law firm representing him.
Fort Hood confirmed in a statement that Perry is a sergeant assigned to the 1st Cavalry Division. The statement said the base was cooperating with the Austin Police Department in its ongoing investigation
No charges have been filed in the shooting and Austin police have not identified the shooter. A spokesman for the Austin Police Department said Friday police have not released the name of the person who shot Foster because the incident is still under investigation.
After the incident, Austin Police Chief Brian Manley said officers responded to a 911 call in which the caller stated they had just shot someone who had approached their car window and pointed a rifle at them.
When officers arrived, they began resuscitation efforts on the 28-year-old Foster, but he died shortly after at a local hospital, Manley said.
The driver accused of shooting Foster was brought in by police for questioning, and his handgun and car were secured for evidence, police said, and another person who fired their gun at the car was brought in for questioning. Both had a concealed handgun license and were released pending further investigation.
Witnesses gave many accounts, including that the disturbance began when the vehicle started honking its horn, Manley said. Witnesses told police that Foster approached the car with an AK-47 assault-style rifle while others in the crowd began striking the vehicle.
One witness to the shooting, James Sasinowski, told CNN that the driver of the car initiated the encounter by turning on Congress Avenue and accelerating toward the protesters.
"This was intentional. It was aggressive and he accelerated into a crowd of protesters," Sasinowski said. "He could have waited for us to pass or he could have gone slowly. We would have allowed him to go through."
"This was intentional," Sasinowski said in an interview with CNN's Chris Cuomo. "It was aggressive and he accelerated into a crowd of protesters. He could have waited for us to pass or he could have gone slowly. We would have allowed him to go through."
Sasinowski said it was less than 10 seconds between the driver stopping his vehicle and when the shots were fired. He said he did not see whether Foster pointed his gun at the car and was about 20 feet away when he heard the first gunshots.
He said he looked over his shoulder and saw the driver's arm fully extended out of the window and holding a handgun. The driver fired several more shots, Sasinowski said.
"I want to be very clear that the driver incited the violence, he accelerated into the crowd of people and he shot first," he said.
In an interview with CNN affiliate KEYE, Broden said that Perry "he does take that turn quickly, but this idea that he did that to run protesters down is absurd."
Broden also told the station that Perry was driving for the ride-sharing company Uber. CNN has reached out to the company for comment but has not yet heard back. Uber has a company policy prohibiting drivers from carrying weapons.
The news release from Perry's attorney said that Perry did not flee the scene but called police as soon as reaching safety.
"Sgt. Perry and his family deeply sympathize with the loss and grief being experienced by Mr. Foster's family," the news release said. "Sgt. Perry is devastated by what happened."
Broden urged people who might want to criticize Perry to "picture themselves trapped in a car as a masked stranger raises an assault rifle in their direction and reflect upon what they might have done if faced with the split second decision faced by Sgt. Perry that evening."

CNN's Jennifer Henderson and Madeline Holcombe contributed to this report.