(CNN)The message from climate activists was passionate, the warning from the scientific community and countries already experiencing the effects of climate change, urgent. The action from world powers has been excruciatingly slow and inadequate.

What had been scheduled as a 12-day summit aimed at hammering out the rules of the 2015 Paris Climate accord, instead dragged on two extra days and highlighted the huge disconnect between the world's biggest polluting nations, and the global community demanding change.
Negotiators in Madrid worked through the night to salvage a rulebook for cutting greenhouse gas emissions before 2020, when signatories must start meeting those targets.
Yet even after extending overtime, many observers, scientists and climate activists called the resulting agreement a monumental failure, strewn with watered-down language that kicks urgent items down the road to COP26 in 2020.
Host country Spain said Sunday's agreement "expresses the urgent need" for new carbon-cutting commitments. Critics said the text falls short on decisive language for doing so. 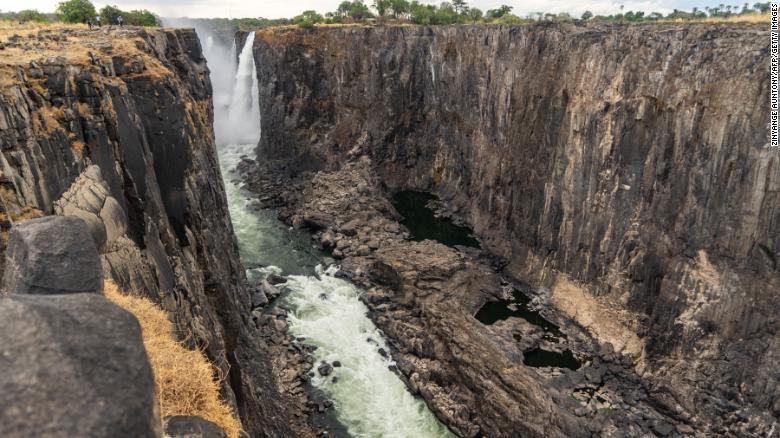 'If the climate stays like this, we won't make it' say those on the frontline of Africa's drought
"As time ran out, the COP looked more and more like a hostage situation inside a burning building -- together with most negotiators, people and planet were held captive," said May Boeve, Executive Director of climate campaign group 350.org, in a statement.
She added that, "after forcing negotiators to keep at it for three days straight," the world's biggest carbon emitters and fossil fuel industry "got what they wanted -- a weakened text that kicks most of the big issues down the road to COP26."
Helen Mountford, vice president for climate and economics at global research organization the World Resources Institute agreed. "There is no sugarcoating it," she said. "The negotiations fell far short of what was expected. Instead of leading the charge for more ambition, most of the large emitters were missing in action or obstructive. 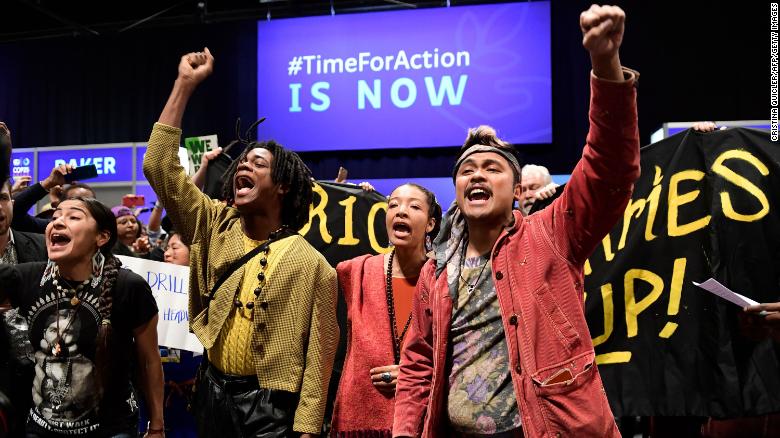 Scientists and activists were left exhausted by the grinding pace of negotiations at the annual meeting.
"The can-do spirit that birthed the Paris Agreement feels like a distant memory today."
There was some glimmer of hope. Eighty governments -- mostly developing and island nations most vulnerable to the effects of climate change -- have committed to bringing enhanced climate plans to COP26 in Glasgow, Scotland, representing over 10% of global emissions, according to environmental communications experts, Climate Nexus.
It added that the United States "showed many different faces" at the summit. While negotiators blocked progress on some issues, House Speaker Nancy Pelosi also led a 15-member Congressional delegation to assure the world that "we are still in."

The summit featured almost 200 countries wrangling over the rules of the 2015 Paris climate accord. Its political foot-dragging was in stark contrast to impassioned pleas coming from campaigners.
On the verge of tears, Ugandan climate activist, Hilda Flavia Nakabuye, told CNN: "When you talk to people who are causing this [climate change] and they are not listening, it feels like you are wasting time."
She was 10 years old when torrential rains stripped her family's crops and drought forced them to sell their land and livelihood.

"I came here to represent millions of African young people who are bearing the brunt of the Climate Crisis..." My speech at the special event on the #ClimateEmergency with @GretaThunberg @marcelomena @Teresaribera @jrockstrom @CRMinae and Freddy Medina. https://t.co/YicT6dq4Cn

"I am the voice of dying children, displaced women, and people suffering at the hands of the climate crisis created by rich countries," Nakabuye told conference members, willing delegates to recognize the scale of the environmental emergency.
"Voices from the global south deserve to be heard... we are humans who do not deserve to suffer a crisis that we did not create."
Negotiators struggled to find common ground at the summit, especially over rules for a new global carbon trading market. It's a major part of the Paris agreement, designed to reduce emissions of planet-warming gases, and has yet to be finalized.
The US, Saudi Arabia, Russia, China, India and other big polluters are accused of obstructionist behavior while Australia and Brazil stand accused of seeking loopholes to recycle old carbon credits in order to meet their commitments under the Paris accord. 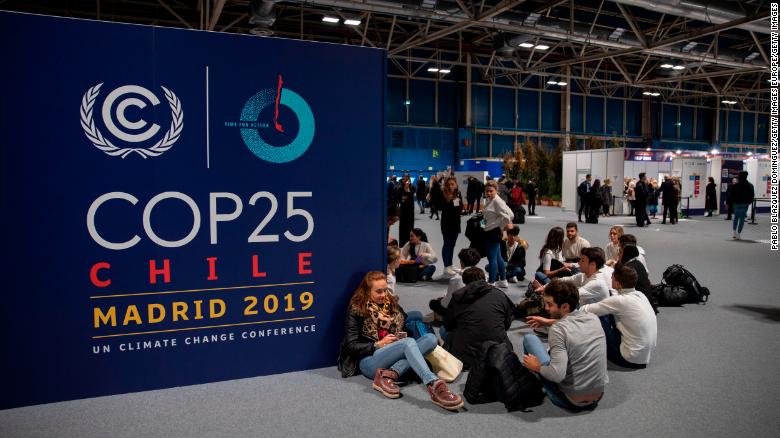 COP25 really is the 'point of no return' in the climate emergency. Here's why
"Brazil is being difficult because what they want their past emission reductions to be carried forward to the new regime," Bob Ward, policy director at the Grantham Research Institute on Climate Change and the Environment at the London School of Economics, told CNN.
Critics say this route, which is similar to using expired banknotes in a modern market, means greenhouse gases won't be lowered at the rate needed to keep global warming to well below 2 degrees Celsius above pre-industrial levels.
And the United States, the history's largest emitter of greenhouse gases, is leaving the process next year. Members of the "We Are Still In" coalition, which was at the conference, are trying to fill the gap. The group consists of US states and cities, businesses, tribes and academic institutions, that came together soon after the Trump administration said it wanted to leave the Paris accord.
"Even though our federal government decided to leave the Paris agreement, governments, institutions, corporations around the US are fully still in and we are working together and with our partners around the world to make sure that those agreements are met," Bill Peduto, the Democratic Mayor of Pittsburgh, told CNN in Madrid. 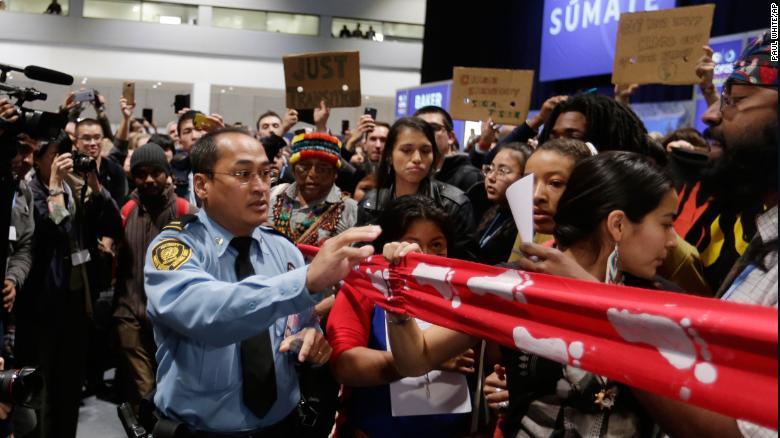 Protests broke out over the lack of climate action at the conference.
The American coalition says it represents an economy worth $6.2 trillion -- equivalent to the third biggest country in the world.
According to its report, it will be able to reduce US total emissions by 37% below the 2005 levels by 2030. But for the US to be able to bring emissions in line with the necessary goal, the federal government needs to come on board.
"It's going to be very difficult to reach a goal of 1.5 degrees Celsius without the US (federal government) playing the leadership role we need it to play," Andrew Steer, President and CEO of the Washington-based climate policy think tank, World Resources Institute, told CNN.

'We need leadership, not talks'

The burning of fossil fuels is the main driver of climate change, and activists blame the oil, coal and gas industry of slowing governments down on emissions targets.
Meanwhile there are mounting public concerns about climate change, a slew of scientific reports warning of climate catastrophe and fury from a youth-led protest movement, which saw an estimated 4 million people join a global climate strike in September.
Teen activist Greta Thunberg who began the youth-led movement of kids striking for the climate, excoriated delegates for their inaction on Wednesday. 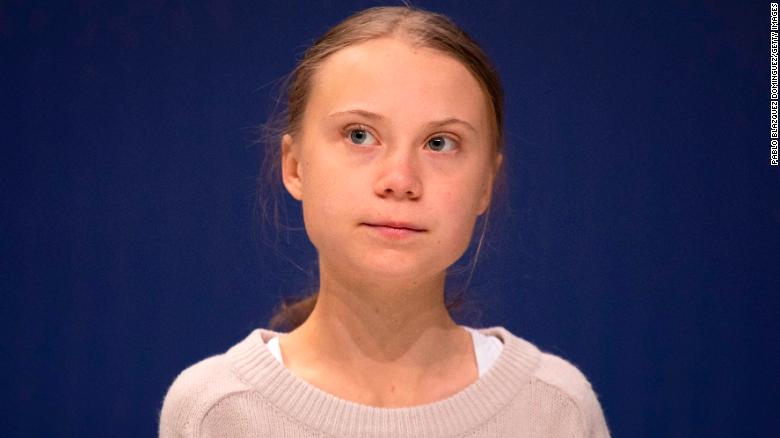 Trump again mocks teen climate activist Greta Thunberg
"We have been striking for over a year, and basically nothing has happened," Thunberg told the crowd. "The climate crisis is still being ignored by those in power, and we cannot go on like this."
There were some signs of hope at the event. On Monday, finance ministers from more than 50 countries unveiled an action plan that would see them incorporate climate solutions into their policies, which Ward described as a "game-changing" moment.
"If we are going to really change to a zero carbon economy, it needs a massive investment and that investment will be made by finance ministries," he said.
Yet campaigners are urgently calling for more dramatic change after decades of debate.
"We all talk about climate emergency but don't act as if there is any," Ugandan campaigner Nakabuye implored the summit.
"Dear leaders, we need leadership on climate action not talks. For how long will you keep negotiating? You have been negotiating for the last 25 years, even before I was born."