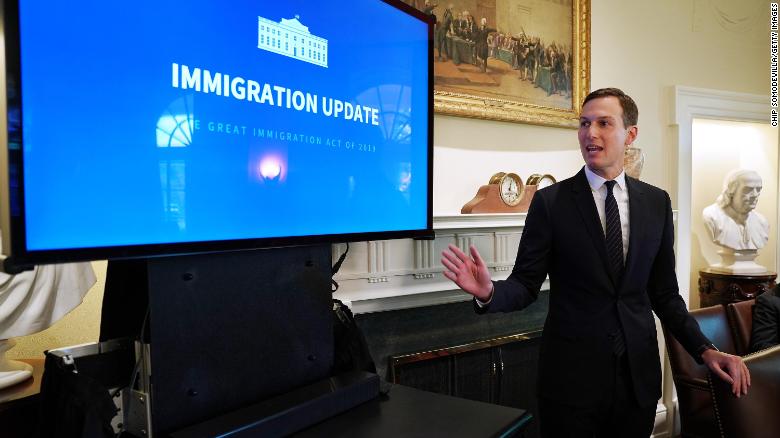 (CNN)Senate Republicans aren't ready to embrace the White House's proposal to overhaul the nation's legal immigration system, amid skepticism about elements of the plan and the timing of it.

At a closed-door lunch Wednesday, Trump's son-in-law and senior adviser Jared Kushner, who spearheaded the proposal, faced questions from GOP senators about the range of immigration matters that are left out of his plan, with some arguing that the plan needs to address other matters in order to get broader support.
Kushner's argument: Focus on issues that could get broader support. But Republicans argue that it's simply not feasible since diving into immigration opens up a range of hot-button issues that have long divided Congress, namely what to do about illegal immigration, and those are inevitably going to reemerge.
"We all know what those are," said Republican Sen. Mike Braun of Indiana, who supports increasing legal immigration. "He said they aren't going to disregard those. He said we are going to focus on this because this ought to be something we all can agree to. Why would the Democrats not be for more legal immigration with the focus on who we are bringing in?"
Others made clear that they need to review the details.
"I'm not on the bill yet," said Sen. Rob Portman, an Ohio Republican, who noted the measure doesn't include anything for undocumented immigrants already in the US. "I'm for border security and moving toward merit based system. ... I just need to look at the specifics."
Kushner has pushed to get all 53 GOP senators on board, but some Republicans privately acknowledge there's little chance that will happen -- and doing so seems to be a waste of energy since it has little chance of becoming law.
In May, President Donald Trump announced a broad immigration plan that would replace long-standing, family-based immigration rules with a points-based system, otherwise known as a merit-based immigration system. Kushner spent months prior to its unveiling meeting with a number of immigration and business groups.
But any measure revamping the nation's immigration system would need to pass through Congress -- a heavy lift, particularly with a Democratically-controlled House and Republican majority in the Senate.
Sen. Ron Johnson, a Republican from Wisconsin who chairs the Homeland Security Committee, said he supports Kushner's plan. He said Kushner is smart to try to pass individual solutions to the immigration problem because Congress has proven it can't pass a comprehensive bill. But he acknowledged many of his GOP colleagues don't support that approach.
"He is focusing on a limited part of the problem. Most members realize that in order to pass something, you're going to need to expand the universe of what needs to be dealt with," Johnson said.
For instance, Florida Republican Sen. Rick Scott said he'd like to see a fix for recipients of the Deferred Action for Childhood Arrivals program added to the bill.
"I'm very supportive of DACA -- we have a lot in my state," he said. "So I think whatever we do, it's important we include them."
Sen. Kevin Cramer, a Republican from North Dakota, said that Kushner's presentation didn't have any new details in it and that it was really just a broad overview of their effort. Cramer said that he wasn't exactly sure why Kushner came at his particular moment. He said he thought Kushner was looking at "building enough support."
"There is probably some sort of critical mass they have in mind," he said.
Pressed on why he sounded so unenthusiastic, Cramer said, "I like it. I like what they are doing especially on the high-skilled worker side of things, but I don't think any of us are overly optimistic that something would actually pass and so maybe there isn't the timing urgency there would be if we were up against some sort of deadline."
Asked why Kushner came Wednesday, Cramer said he wondered that himself.
"I was sort of curious about that. It was great to see him. I like Jared a lot, but actually that thought crossed my mind. I wonder if he wanted to come update us or Mike didn't have a program for today," he said, referring to Sen. Mike Lee of Utah, who is responsible for planning the steering lunch every Wednesday.