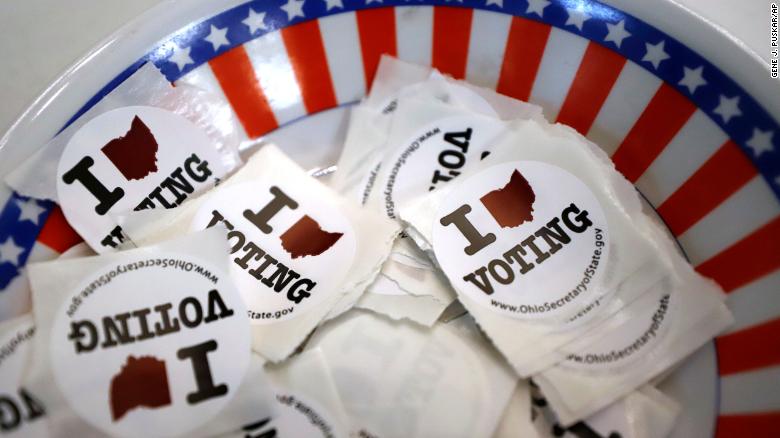 (CNN)States left and right are postponing their primaries because of the coronavirus.

The most popular reschedule date? June 2. Consider it a Super Tuesday, round four.
Connecticut, Delaware, Indiana, Maryland, Ohio and Rhode Island have all pushed their election dates back in an effort to keep poll workers and voters safe -- and to abide by the federal government's guidelines around social distancing. Huge thanks to CNN's Kate Sullivan for compiling the list.
Ohio was the first state to hit the delay button. Gov. Mike DeWine was one of the first governors to swing into action around the coronavirus, and just hours before his state was set to vote on March 17, had his health official stop in-person voting because of health and safety concerns.

Other states, like Alaska, pushed back their primary dates and are stepping up vote-by-mail to allow people to safely cast ballots.
All the delays just add to the uncertainty around the still-ongoing Democratic presidential primary.
Vermont Sen. Bernie Sanders, meanwhile, just staffed up in New York and plans to participate in any April debate -- despite the fact that the Democratic National Committee has not selected a location, media partner or date. The New York primary is still scheduled for April 28.
Former Vice President Joe Biden, the front-runner and leader in the delegate count, told reporters Wednesday that he thinks the Democratic field has "had enough debates" and that they should "get on with this."
The Point : Due to the coronavirus, expect a big election day on June 2.