Sham Shui Po, Hong Kong (CNN)Tse Lai-nam has all the gear necessary for the next Hong Kong protest. He's rarely missed one.

The hard hat which has become a symbol of the semi-autonomous Chinese city's summer of discontent can be found at any hardware store, but his full-face gas mask retails online at around $200, just over 15% of his monthly salary. Fortunately, the 26-year-old received his for free, bought with donations from a crowdfunding campaign supporting the ongoing anti-government protests.
Originally sparked by opposition to a now-suspended extradition bill, the unrest -- now in its eleventh week -- has expanded to include a range of demands tapping into longstanding frustrations over stalled political reform and economic injustice in Hong Kong.
Tse lives in Sham Shui Po, Hong Kong's poorest neighborhood. In the most expensive city on earth, where apartments can cost 21 times the average yearly wage, hundreds of thousands of people cram into tiny subdivided flats and "cage homes" barely big enough for a bunk bed. 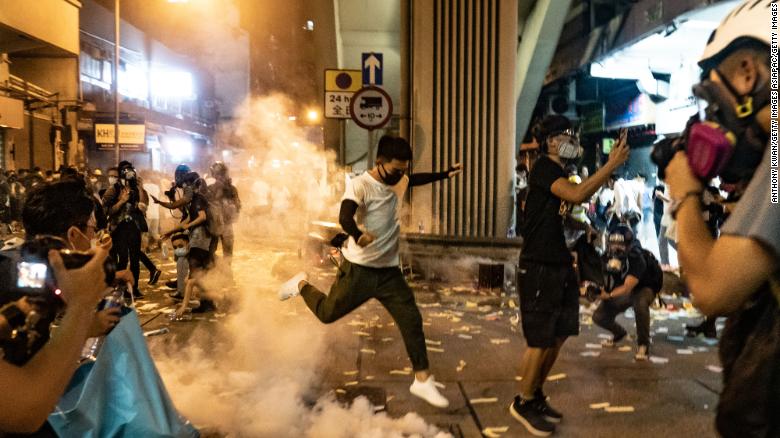 A protester attempts to kick a tear gas canister during a demonstration on Hungry Ghost Festival day in Sham Shui Po district on August 14, 2019 in Hong Kong.
Sham Shui Po has become a key battleground during the protests, with multiple clashes between protesters and police. On Wednesday, police warned residents to close their windows before they deployed tear gas to disperse a relatively small crowd which had gathered following demonstrations which shut down the city's airport on Monday and Tuesday.
Earlier that night, CNN visited Tse's 140 square foot (13 sq meter) apartment which he shares with his cat, Tai Kwan. Tse works as a courier for a law firm during the week, making around $1300 per month. He spends $740 of that on rent, and he's proud of his apartment. Despite his place being expensive and cramped, he relishes the freedom it offers -- rare for many working-class young people in Hong Kong who live with their parents until they have a family of their own.
Earlier this year Tse moved out of his parent's home because he doesn't get along with his father. He said they fell out over politics. 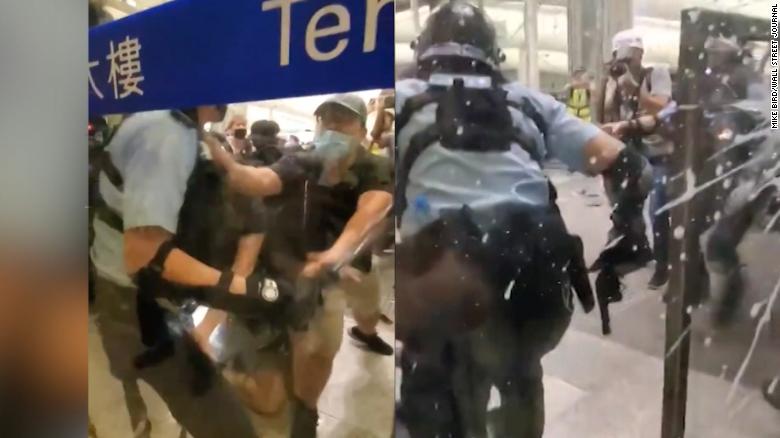 Officer appears to draw weapon after protesters beat him 01:34

Tse's political awakening came when he joined demands for the introduction of a universal pension scheme in Hong Kong -- something that would have benefited many working-class families in Sham Shui Po.
"I have seven years of experience in the pro-democracy movement," he said. He is now a supporter of Demosisto, the political party co-founded by activist Joshua Wong, which is closer to the mainstream than many of the groups taking part in the ongoing anti-government protests but still vehemently opposed to any move that would curtail the city's hard won freedoms.
While Tse has taken part in "almost all" of the protests over the past two months, he denies committing any violent acts, saying he joins in on the frontlines to "construct barricades," "help the injured" and "save people from the police." 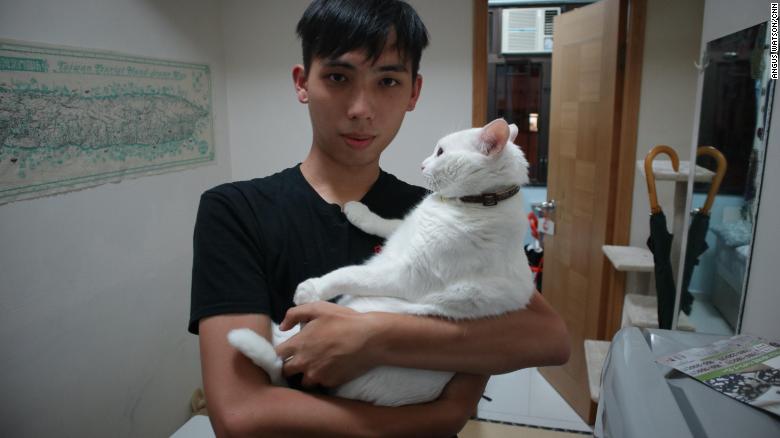 Tse Lai-nam, 26, is one of many residents of Sham Shui Po, one of Hong Kong's poorest neighborhoods, who has taken part in the city's anti-government protests.
"Personally, I completely disagree with violent acts, but I understand why they do them," Tse said. "They have been treated unfairly, the police have attacked protesters using extreme force."
Since June 12, when police first used tear gas and rubber bullets to disperse protesters outside the city's legislature, there have been numerous accusations of police brutality, including by international human rights groups, and calls for an independent investigation. Police have pushed back, saying they only use force in response to protester violence. 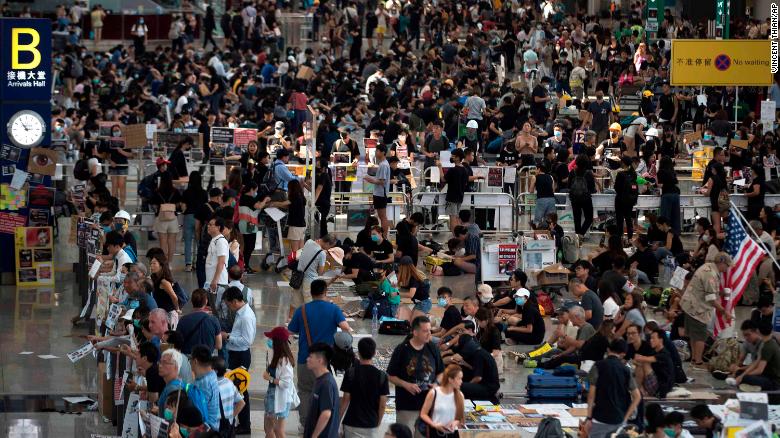 While the protest movement may have its roots in the extradition bill and frustration with Hong Kong's semi-democratic system, economic and class concerns are not far from the surface.
The richest 10% of Hong Kongers earn around 10-times Tse's monthly salary, which is already many times more than the city's poorest survive on. Tse and the young people who clashed with police on Wednesday in Sham Shui Po are a world apart from the business travelers and jet-setting rich who were inconvenienced by the airport shutdown.
Many wealthier Hong Kongers also have the backup of a foreign passport, allowing them to leave should Beijing tire of the "one country, two systems" principle by which Hong Kong has been governed since sovereignty passed from British to Chinese rule in 1997.
"The government should take from the rich and give to the poor so they can live in Hong Kong, too," Tse said. "The government has never done anything to promote social mobility, instead it has increased wealth disparity and made it more difficult for young people to buy an apartment." 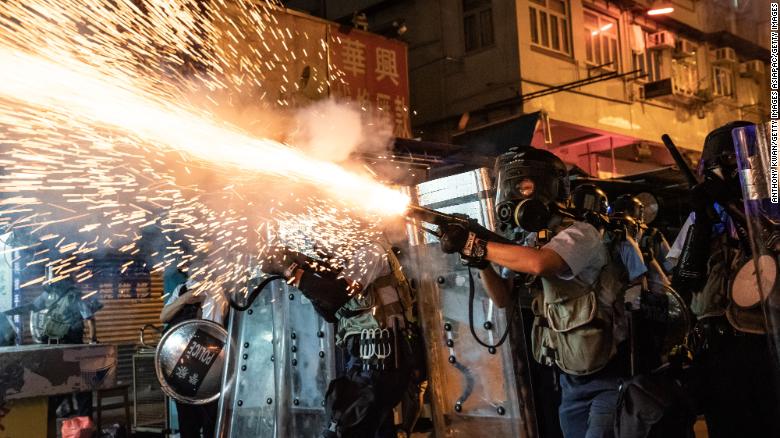 Police fire tear gas to clear pro-democracy protesters during a demonstration on Hungry Ghost Festival day in the Sham Shui Po district on August 14, 2019 in Hong Kong.
While Chief Executive Carrie Lam hasn't acknowledged that the financial stress on working and young people could be at the core of political discontent in Hong Kong, her advisers say she knows it is a problem.
A senior government official told CNN on background that the government understands that much of Hong Kong's youth feels "hopeless". The 2016 census showed that youths are increasingly dropping out of the workforce. For those in work, salaries are not keeping up with ever-rising living costs, and there are fears of a brain drain of young people as the economic and political stresses drive people to move overseas.
On Thursday, Financial Secretary Paul Chan announced a $2.4 million economic stimulus package designed in part to relieve the economic downturn caused by the ongoing protests. The package included rent reductions for government housing, extra social security payments and school subsidies. 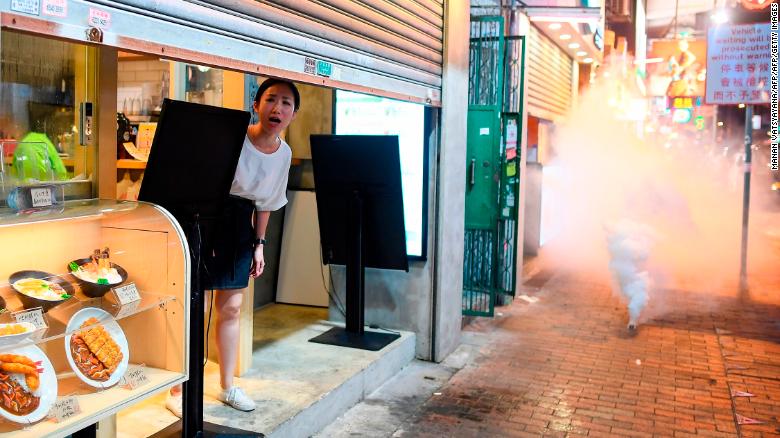 A woman reacts as police personnel fire tear-gas shells to disperse pro-democracy protestors in the Sham Shui Po Area of Hong Kong on August 14, 2019.
In particular, public housing remains a key complaint for many working and middle class Hong Kongers. According to government statistics, there are almost 150,000 people on a waiting list for a subsidized flat, and the average wait time is over five years. The government has admitted that it will miss a target of building 280,000 new flats by 2027, with a shortfall of around 50,000, forcing more people into tiny apartments in the private sector.
And that's only the rental market. For many young Hong Kongers, owning your own home, once a key part of the city's post-1997 identity, is completely out of reach.
"How can (young people) buy a flat?" asked Sham Shui Po community organizer Gordon Chick. "It depends on your parents. Rich? Or not. If they are rich they can give you the money to buy. If not, sorry."

"7k for a house like a cell and you really think we out here scared of jail?" 😭 pic.twitter.com/Z5dMmABLLS

Not afraid of prison

More than 700 people have been arrested in the protests since June, and many are facing serious prison terms on charges of riot and unlawful assembly.
Tse has been arrested twice in protests in the past -- though not this summer -- and he said he isn't afraid of going to jail.
He loves his apartment, but many in the city joke darkly that a prison cell would be larger than their expensive lodgings. Prison cells in Hong Kong are on average 75 square feet (7 sq meters), not too much smaller than Tse's flat and a good deal larger than many apartments in Sham Shui Po.
Graffit scrawled across the walls of the equally poor neighborhood of Wong Tai Sin captured how economic issues play into people's willingness to protest: "7k for a house like a cell and you really think we out here are scared of jail?"