(CNN)Republican leaders on Capitol Hill are fearful that the conservative hardliner Kris Kobach could cost them a crucial Senate seat in Kansas and potentially their narrow majority -- and are eager to find a way to defeat him in a hotly contested primary.

But Kobach is getting face time with President Donald Trump and consulting with Trump's son-in-law, Jared Kushner, over an immigration plan that the White House is developing. And no one knows how Trump will insert himself into the GOP primary, and whether Senate Republican leaders will succeed in getting him to endorse a candidate they argue has a better chance of winning in November.
In late January, Kobach dropped by the White House and met with Kushner -- and also had a private meeting with Trump and a senior White House aide where they discussed the Senate race. The President was "encouraging" at the January 27 meeting, according to a Kobach spokesperson, even though the Kansas conservative did not ask for an endorsement.
"It's likely that the Senate candidate who will do the best is the one who can best articulate Trump's position and is most associated with Trump in his positions," Kobach, an immigration firebrand and voter-fraud crusader, told CNN. "And the person who best fits that bill would be me."
Kobach's candidacy has unnerved GOP leaders, who worry that his sharply conservative positions, particularly on immigration, are bound to turn off middle-of-the-road Republicans, as they did when he lost the 2018 gubernatorial race to Democrat Laura Kelly. Senior GOP officials tell CNN that their two biggest problems currently in holding their Senate majority are in Georgia, where a messy battle between two Republicans could benefit the Democrats there, and in the increasingly complicated Kansas Senate race. 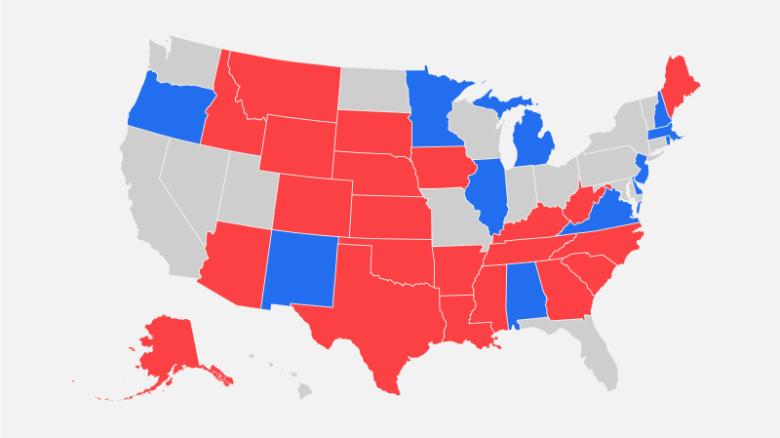 Mike Pompeo just created a major headache for Senate Republicans
Indiana Sen. Todd Young, the chairman of the National Republican Senatorial Committee, told CNN that GOP voters in Kansas are looking for someone who is "a good fit for the state" and "can actually win a general election."
Asked if he thinks Kobach can a general election, Young said: "All I have to answer that question is recent history -- the gubernatorial race, which he lost."

Behind the scenes, GOP leaders are eagerly looking for an alternative to Kobach. After failing to convince Secretary of State Mike Pompeo to run for the seat, they have been assessing the current field of candidates -- and looking at a potential new one.
Privately, the National Republican Senatorial Committee recently met with Bob Hamilton, a father of 12 who owns a plumbing company in Overland Park, Kansas, according to multiple sources with knowledge of the session. A source familiar with Hamilton's thinking said he is seriously weighing whether to run in the race.
"Bob Hamilton is what people are buying right now - a conservative businessman outsider," the source said, adding that a decision could be made well before the June filing deadline for the August primary.
Yet there are concerns that the entry of Hamilton into the race will only bolster Kobach's chances, especially in a crowded field that also includes Rep. Roger Marshall, who was first elected in 2016 after defeating an incumbent congressman, Tim Huelskamp, a favorite of the Tea Party who had drawn the ire of business and agricultural groups. Some of those wounds from that fight are still raw, GOP sources said. And at least one conservative group, the Club for Growth, is vowing to drop big bucks in a bid to stop Marshall.
Marshall, an obstetrician-gynecologist, represents the same solidly Republican, farm-focused district from which former Senate Republican Leader Bob Dole, Sen. Jerry Moran and the retiring Sen. Pat Roberts built the base of their power.
"Kris tends to be a polarizing candidate," Roberts, whose retirement opened up the fight for his seat, told CNN. "He does get a lot of support -- he has a strong base. He just ran for governor last time; I think there's a general feeling that he could have done much better. But we'll see."
Kobach rejects the notion that his Senate race would be a repeat of the 2018 contest for governor, noting that while Democrats have long been competitive for state races, they haven't won a Senate race since 1932. He says that while Kelly attacked him over funding for public schools, for instance, the issue set will be different during this presidential election cycle. 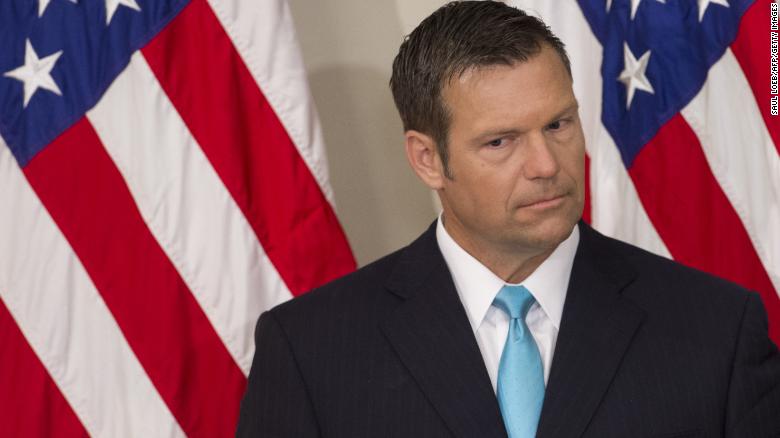 New York Times: Kobach demanded perks, top Cabinet post to become Trump's 'immigration czar'
Marshall's camp argues that the more candidates in the race only serves to benefit Kobach, given that state Senate President Susan Wagle and former Kansas City Chiefs player and businessman Dave Lindstrom are also running in the party's primary.
"That's his only path to victory — is this thing getting more and more crowded," said Brent Robertson, Marshall's chief strategist, referring to Kobach. "If he gets Roger Marshall one-on-one, he's absolute toast."
Last year, Marshall's campaign held $1.9 million on hand, the most of any candidate in the race. But state Sen. Barbara Bollier, a former Republican running for the Democratic nomination, raised an astounding $1.1 million in the last three months of 2019, crushing the competition that financial quarter. Kobach had less than $200,000 on hand at the end of 2019.
Senate Democratic leaders are closely engaged with the race. On a private conference call with donors on Friday, Senate Minority Leader Chuck Schumer pointed to a poll showing Kobach ahead, noting he could be the nominee, according to a source briefed on the call. 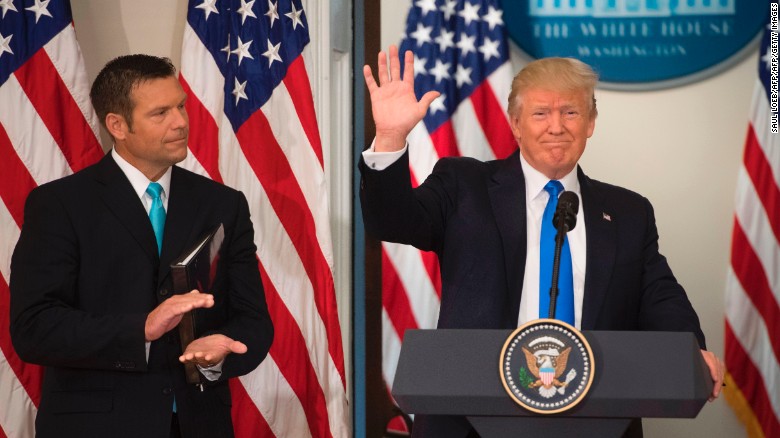 President Donald Trump waves after speaking alongside then-Kansas Secretary of State Kris Kobach during the first meeting of the Presidential Advisory Commission on Election Integrity in the Eisenhower Executive Office Building next to the White House in Washington, DC, in July 2017.

Trump pulled in both directions

But Trump could have the ultimate say in pushing a candidate over the finishing line -- and what he decides to do remains the ultimate wildcard. Since Pompeo's decision became clear, Trump has been going back and forth about making an endorsement in the Kansas Senate race, but at this stage does not appear to be close to making one, people familiar with his thinking said.
Trump is closely watching polls in the state and has heard from multiple people that Kobach could threaten Republican control of the seat. Some of his advisers have gently pressed him to endorse Marshall. But he has signaled he's not ready to decide yet.
Still, the Republican candidates are presenting their cases to him. Trump met with Marshall a couple weeks before he met Kobach, on January 13, but spoke with Kobach on that day, sources said. Trump actually tried to phone Kobach from the Oval Office when he was meeting with Marshall, but the call went to voicemail and they connected later. Both meetings also included members of Trump's political team.
On January 23, Trump tweeted out a poll from a pro-Marshall Super PAC showing the race neck-and-neck between the two, with a third of GOP voters still undecided. Trump noted, "Close race in Kansas!"
Besides touting the most money, Marshall's camp also boasts its staunch support of Trump. In response to Kobach's claim that he was more closely linked to the President, Robertson, the Marshall adviser, replied, "Facts are more important than talk," arguing Marshall votes with Trump nearly 100% of the time.
Democrats are hoping to take advantage of the GOP infighting in 2020, building off their success two years ago.
Democrats won races across the state in 2018, an indictment not only of Kobach but also of Trump and the legacy of former Republican Gov. Sam Brownback, whose unprecedented tax cuts led to a budget shortfall worth hundreds of millions of dollars. Democrats didn't just flip the governor's residence, they also broke the state's entirely Republican congressional delegation, winning one of four Kansas House seats and coming close in another conservative district.
Nevada Sen. Catherine Cortez Masto, the chairwoman of the Democratic Senatorial Campaign Committee, said Democrats "absolutely" can win in Kansas this year. Asked about the prospects of Kobach as the GOP nominee, she said: "There are stark differences" between the conservative candidate and Bollier.
"And so I think it will be for purposes of people in Kansas, they're going to vote for the individual who listens to them and supports the issues that matter to them," she told CNN.