(CNN)Amy McGrath, a Democrat and former fighter pilot, raised $10.7 million in the first three months of her campaign against Sen. Mitch McConnell, a sign of the overwhelming desire in her party to kick the Senate majority leader out of office even if the bid seems like a longshot in deeply red Kentucky.

"Mitch McConnell has never faced an opponent like Amy McGrath," her campaign manager Mark Nickolas said. "Change is coming."
The massive haul once again reveals McGrath to be a fundraising powerhouse. In her 2018 congressional race, an ad highlighting McGrath's background — the first woman Marine to fly an F-18 in combat, who flew more than 85 combat missions in the Middle East -- went viral and helped her raise millions before she narrowly lost in November. In the last financial quarter, McGrath received on average $36 and donations from every county in Kentucky, according to her campaign.
But she is now running for Senate in Kentucky, which is redder than the Lexington-area House district she ran for in the last election cycle. And McGrath has made some early missteps in the her 2020 bid. In July, she said she probably would have voted to send then-Judge Brett Kavanaugh to the Supreme Court, after criticizing the nomination in 2018. Hours later, she flipped her position, saying she would not have voted to confirm him. 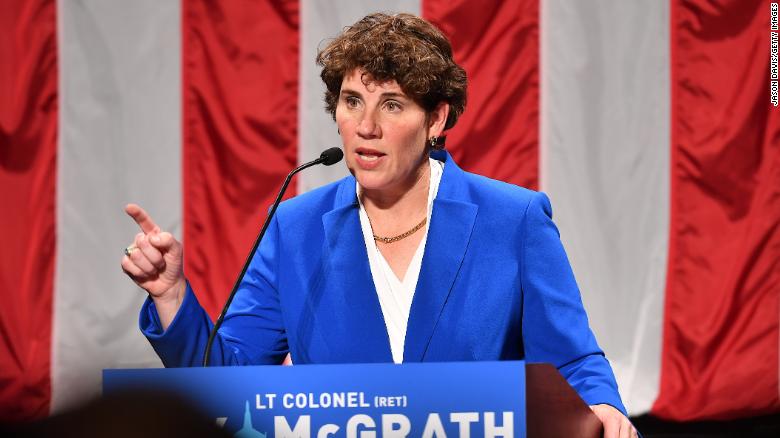 Amy McGrath address supporters after her loss in November 2018 in Richmond, Kentucky. McGrath is running this cycle against Senate Majority Leader Mitch McConnell.
McConnell won his first race for the Senate in 1984 and is seeking his seventh term with President Donald Trump at the top of the ticket in 2020. Trump dominated Kentucky in 2016, winning with nearly 63% of the vote.
McConnell campaign manager Kevin Golden said in a statement that McGrath's fundraising number, which would put her just outside the top tier of Democratic presidential contenders, is buoyed by donors from outside the state.
"Far-left liberal activists from New York and California absolutely hate the fact that Kentucky's values, culture and priorities are put at the front of the line as long as Mitch McConnell leads the Senate," Golden said. "They can flood her campaign with millions but they can't vote in Kentucky."
Jennifer Duffy, a senior editor for the nonpartisan Cook Political Report, told CNN that McConnell is a "flashpoint" for political fundraising, much the way Texas Sen. Ted Cruz was when he narrowly beat then-Rep. Beto O'Rourke in 2018.
"There could be a lot of similarities between the O'Rourke-Cruz race and this race," said Duffy, noting they both feature red states with "unpopular Republicans that fire up small Democratic donors across the country."
"But as O'Rourke found out, that doesn't make it an easy race to win," she added.