(CNN)New Zealand on Monday marked one week since the deadly volcano eruption that came with little warning while 47 people were visiting White Island, as the search continues for the bodies of two people who remain missing.

A nationwide minute's silence was held on Monday afternoon at 2:11 p.m. local time (8:11 p.m. Sunday E.T.) -- the time one week ago that the island, also known as Whakaari, erupted.
The official death toll is now 16, including 15 people who died in New Zealand and one person who died after being transferred to Australia. Another two people are believed dead, with police saying their bodies are likely to be in the water around White Island.
In a heartfelt Instagram post Monday, New Zealand Prime Minister Jacinda Ardern paid tribute to those who did "extraordinary things to save lives," including health professionals and those who went to the island to recover bodies.
"There are almost no words for the stories of both the aftermath and the loss that has followed," she said. "Those who have been lost are now forever linked to New Zealand, and we will hold them close."

A week ago New Zealand experienced the most extraordinary tragedy - an eruption on Whakaari/White Island while kiwi guides and guests from around the world were visiting. Lives were lost immediately, and in the days that have followed others have succumbed to their injuries. There are almost no words for the stories of both the aftermath and the loss that has followed. I want to pay tribute to the many people who did extraordinary things to save lives - whether it was through rescue efforts or the ongoing response by health professionals across the country. To the recovery team who made it their mission to bring loved ones back from the island, right through to the council, emergency management team who have supported the local community all the way through. To Ngāti Awa, for the outpouring of manaakitanga and support to all that have needed a safe haven during this time. Those who have been lost are now forever linked to New Zealand, and we will hold them close. (Image: a photo I took while travelling out to Whakatane with our defence team. A beautiful outlook on a very sad day.)

In a Twitter post on Monday marking one week since the eruption, Australian Prime Minister Scott Morrison noted that 10 Australians were among those killed.
The majority of victims who have been formally named by police are Australian. One of the youngest who has been named is Australian permanent resident Matthew Hollander, who was only 13.
Some of those injured in the eruption remain in hospital. Last week, 13 patients were transferred to hospitals in Australia, according to New Zealand authorities.
New Zealand has ordered 1,292 square feet (120 square meters) of skin to treat patients injured in the eruption, authorities said Wednesday.

Difficult conditions and the threat of another eruption prevented authorities from going to White Island in the days after the eruption, but on Friday, a specialist team recovered six bodies from the island. Those bodies were taken to Auckland for post mortems and identification.
Over the weekend, a police dive squad searched the waters around the island for the two remaining bodies, Deputy Commissioner John Tims said. The waters around the island are contaminated, and divers have reported seeing a number of dead fish and eels washed ashore and floating in the water, he said. 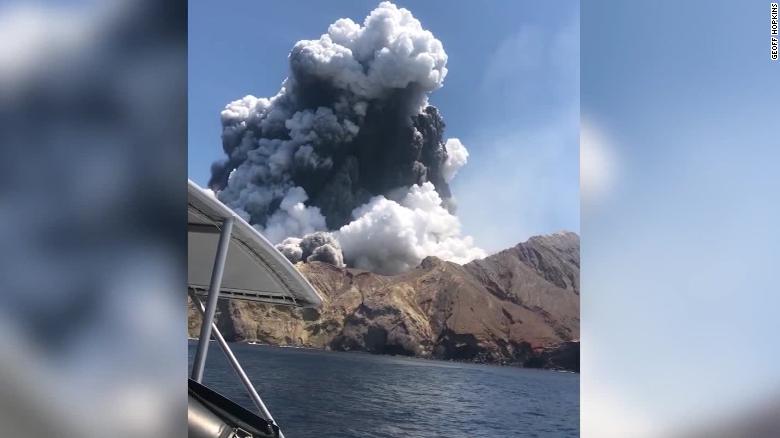 Tour boat turned around to rescue volcano victims 03:48
On Sunday, a recovery team wearing protective clothing returned to the island to search for the two bodies.
"While it is frustrating not to have located the remaining two bodies, I'd like to reiterate our commitment to doing all we can to provide a sense of closure to the grieving families," he said.
White Island, an active volcano off the east coast of New Zealand's North Island, has become a popular tourist destination in recent years, receiving over 10,000 visitors annually.
But in the week since the eruption, questions have been raised over how safe it was for tourists to be on the island, and whether more could have been done to prevent the tragedy.
"In my opinion, it is not acceptable to allow the general public to walk on the floor of a major explosive volcanic crater like that, with a history of that volcano and a high level of geothermal activity that it constantly shows," Monash University volcanologist Raymond Cas said. "There are many other areas in New Zealand where people can experience volcano tourism with much lower levels of risk."
Health and safety regulator WorkSafe is investigating all health and safety issues around the eruption. Police are also investigating the circumstances around the deaths and injuries.