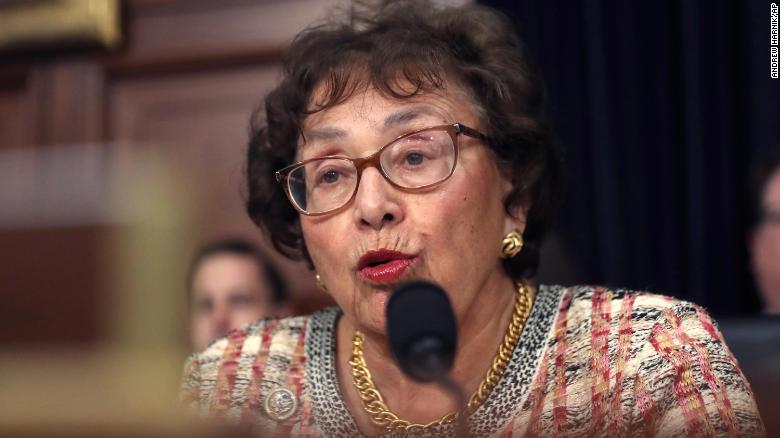 In this April 2019, file photo, Rep. Nita Lowey, D-N.Y., speaks during a hearing on Capitol Hill in Washington.

(CNN)House Appropriations Committee Chairwoman Nita Lowey announced Thursday afternoon that she will not seek reelection in 2020 after more than three decades of serving in Congress.

"After 31 years in the United States Congress, representing the people of Westchester, Rockland, Queens and the Bronx, I have decided not to seek re-election in 2020," the New York Democrat wrote in a statement. "It is my deep honor and privilege to serve my community and my country, and I will always be grateful to the people who have entrusted me to represent them."
Lowey became the first woman to chair the powerful appropriations panel earlier this year, after Democrats took the House in the 2018 midterms.
In her statement, Lowey said she "will fight vigorously for House Democratic priorities as I negotiate spending bills for fiscal years 2020 and 2010." Congress faces a government funding deadline on November 21 after lawmakers agreed to a temporary stopgap for federal spending last month.
Lowey represents New York's 17th Congressional District. It is a Democratic stronghold -- in 2018, she won reelection with 88% of the vote. Before her announcement Thursday, Lowey had been eyed as a target by progressives who hope to unseat a number of senior members of the party in 2020. She was set to face a primary challenge from Mondaire Jones, an attorney who was previously a staffer in the Obama administration's Justice Department.
With her decision to retire, the reliably blue district could host a crowded and competitive race among Democrats vying to replace her.
Lowey is the fourth House Democrat this year to opt against seeking reelection.
RELATED: Here are the lawmakers who are not seeking reelection to Congress in 2020
"Thank you to the people of my district for the opportunity to serve," she wrote. "I will continue working as hard as ever -- with the same optimism and energy -- through the end of this term in Congress."