The Swedish company said it filed confidential IPO forms with the SEC, the company said in a statement Tuesday. The move is "the first official step towards pursuing a potential IPO," said Sara Fletcher, an Oatly spokesperson. The price and number of shares that will be available for purchase has not yet been determined, the company said.
Interest in plant-based foods has been growing in recent years. Over the summer, Oatly scored a $200 million investment from a Blackstone-led investment group that included Oprah Winfrey, Natalie Portman, Jay-Z's entertainment agency and former Starbucks CEO Howard Schultz. The equity investment represents a 10% share of the company, Fletcher told CNN Business at the time. 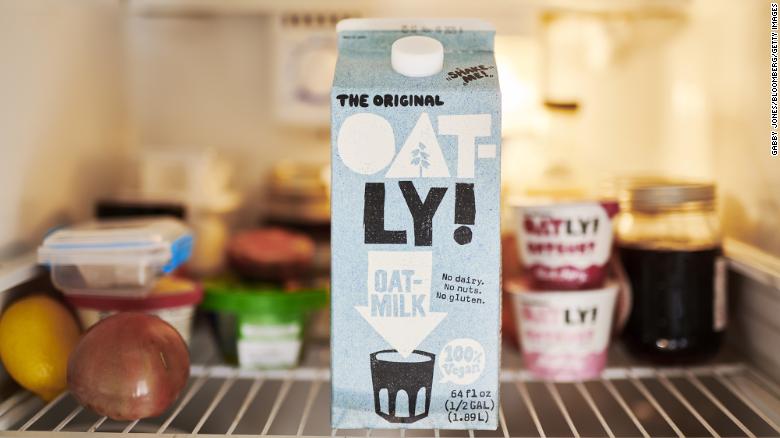 Oatly is eyeing a US IPO.
Oat milk has gained popularity among coffee drinkers who are avoiding dairy.
Major companies have been paying attention to the trend. Starbucks announced in December that it will start serving oat milk at its cafes nationwide this spring.
A number of major consumer goods companies and smaller upstarts have their own version of the product. Danone (DANOY) sells oat milk under its Silk brand. HP Hood, a dairy company, has Planet Oat. Chobani sells oat milk, as well as ready-to-drink coffee with oat milk and oat milk creamers. Nestle (NSRGF) and Starbucks (SBUX) launched non-dairy creamers made with oat and almond milk last year.
But Oatly has also made a name for itself with its in-your-face marketing tactics, like meta billboards and transit ads (one example, spotted by OOH Today, which tracks out-of-home advertising: "You actually read this? Total success"). The company also aired a low-budget commercial during this year's Super Bowl featuring CEO Toni Petersson playing a keyboard and singing a repetitive song, with lyrics "Wow! No Cow," in a field. Many didn't like the commercial. Oatly then gave away "I totally hated that Oatly commercial" t-shirts.
— CNN's Alicia Wallace contributed to this report.