Washington (CNN)The White House has been involved in discussions with GOP allies over the last several days to make sure they're ready in the event Democrats get enough votes to allow witnesses, such as former national security adviser John Bolton, to testify in President Donald Trump's impeachment trial, a senior administration official and a person familiar with the matter tell CNN.

The sources say part of those discussions involve the implications, such as executive privilege concerns, if former and current White House officials such as Bolton and acting White House chief of staff Mick Mulvaney are forced to publicly testify.
Testimony from those officials could add key revelations to the inquiry because of their first-hand knowledge of the administration's dealings with Ukraine.
"There are a series of contingencies. We're prepared," the senior administration official said. The sources would not disclose what the contingencies are. 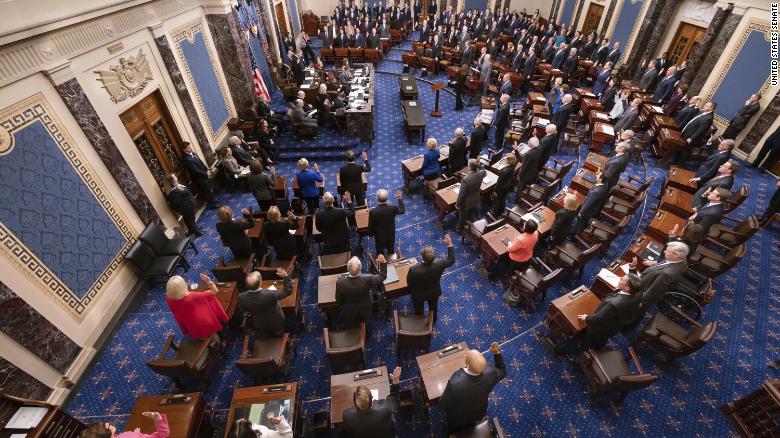 Impeachment guide: Voting on the trial rules
Senate Minority Leader Chuck Schumer and Senate Democrats have pushed for the Senate to hear from four witnesses, including Bolton and Mulvaney, and to subpoena documents that the White House blocked from the House's impeachment inquiry. But Senate Majority Leader Mitch McConnell says he has enough Republican votes to back the rules resolution without Democratic support.
The White House expectation is that Schumer would not have the votes on the first day of the Senate trial on Tuesday, but there is the potential he could get enough Republicans on his side for the witness vote after both sides present their cases.
The top focus for the White House, according to the sources, is to make sure Schumer does not get the necessary 51 votes.
"You'd have to get 51 senators to say the Senate is going to waive executive privilege. That's a pretty tall order," one of the sources said.
The Washington Post first reported on the White House and GOP strategy discussions regarding witnesses.
Other potential witnesses include Mike Duffey, the White House official in the Office of Management and Budget responsible for overseeing national security money and a Trump political appointee, and Rob Blair, an assistant to Trump and senior adviser to Mulvaney
McConnell's organizing resolution for the Senate trial puts off the question of witnesses until after the two sides present their opening arguments and there are 16 hours of questions for senators, which they will ask through Supreme Court Chief Justice John Roberts, who is presiding over the trial.
At that point, the resolution includes a proposal in which the Senate would vote on a motion on "whether it shall be in order to consider and debate under the impeachment rules any motion to subpoena witnesses or documents."
McConnell plans to give House impeachment managers and Trump's legal team each 24 hours divided over two days for their opening arguments in the trial, a move that indicates Senate Republicans are pushing to finish the trial as quickly as possible -- ahead of the President's February 4 State of the Union address.
Democrats oppose McConnell's schedule, which House Democratic aides said Monday was an effort to "conceal the President's misconduct in the dark of night."