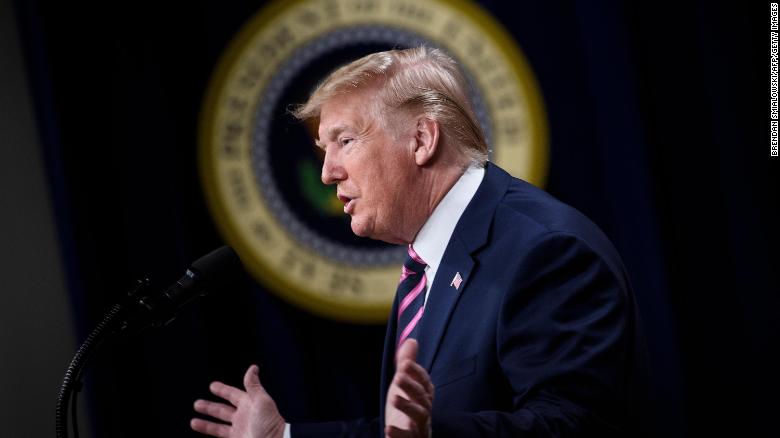 Washington (CNN)Articles of impeachment against President Donald Trump are expected to be passed through the House before the end of the week, less than three months after House Speaker Nancy Pelosi announced a formal impeachment inquiry.

Here's how things will go:
Full House vote
Two articles of impeachment are headed to the House floor for a vote. If a simple majority of the House votes to approve either article, Trump will become the third president ever formally impeached — President Richard Nixon resigned after the votes passed the House Judiciary Committee but before they could make it to the full House.
What's in the articles?
Looming Senate trial
If the articles pass in the House as expected, the Republican-led Senate will hold a trial presided over by the Chief Justice of the Supreme Court -- right now, that's John Roberts, a George W. Bush appointee who has played a pivotal role.
Senate Democratic Leader Chuck Schumer made it clear in a letter to Majority Leader Mitch McConnell Sunday night he prefers a Senate impeachment trial with witness testimony and new documents, a direct rebuttal to top Republicans who have argued in recent days that a shorter trial without witnesses would spare the Senate from becoming a partisan circus.
Schumer called for at least four witnesses, including acting White House chief of staff Mick Mulvaney, former national security adviser John Bolton, senior adviser to the acting White House chief of staff Robert Blair and Office of Management and Budget official Michael Duffey to testify.
Schumer's letter echoes House Intelligence Chairman Adam Schiff's comments earlier Sunday stating that he would like for some witnesses to be called during the expected Senate impeachment trial.
In response to Schumer's letter, McConnell spokesman David Popp said, "Leader McConnell has made it clear he plans to meet with Leader Schumer to discuss the contours of a trial soon. That timeline has not changed."
The White House is still planning its Senate trial strategy and considering whether or not it will call witnesses, which may lengthen the trial. Trump said earlier Sunday that "I wouldn't mind the long process because I'd like to see the whistleblower -- who is a fraud."
The politics of impeachment
When Justin Amash became the only congressional Republican to back impeachment — before the Ukraine scandal even broke — he was essentially chased out of the party. Now that he's an independent, there's talk Amash could join with Democrats to lead the prosecution of Trump in the Senate -- though it remains highly unlikely.
Make no mistake, Amash is no progressive. And he's opposed to Democrats' platform in just about every way that isn't impeachment. But in today's America it feels like Republicans and Democrats, liberals and conservatives have been scrambled into new categories. Team Trump or team impeachment. Politicians are molting before our very eyes, growing new skins, ala Republican Sen. Lindsey Graham. They either adapt to the party or they skin out.
There's further evidence with Rep. Jeff Van Drew, the New Jersey Democrat from a swing district who, after announcing he opposed impeachment, is now expected to announce he's no longer a Democrat.
Both Amash and Van Drew represent hotly contested House districts, which speaks to the fact that this impeachment will have an effect come November not only on the White House, but also on the House of Representatives. We just don't know what the effect will be. More people support impeachment than don't in polls, but then again Trump is President after more people voted for the other person.
The only thing we know for sure is there appears to be no place in either party for anything but the party line.

Amash's role -- Pelosi is "highly unlikely" to name Amash as one of the impeachment managers, according to a House official.
"It's highly unlikely that the speaker would take this sort of risk when she has so many of her own well-qualified members clamoring for a spot," an official close to the impeachment inquiry tells CNN.
A group of freshmen Democrats had been urging Pelosi to draft Amash as one of the impeachment managers. Flashback to Amash's very lonely summer from CNN's Haley Byrd.
How is Trump weathering impeachment? -- The President's current net favorability rating has remained steady at just south of -10 points over the course of the last few months. By this metric, it appears that the Ukrainian scandal has not hurt him politically.

More on the expected Senate trial...

House Judiciary Chairman Jerry Nadler on Sunday criticized McConnell after the Kentucky Republican said he would coordinate with White House counsel on "everything" regarding the probable Senate impeachment trial.
Nadler said for Senate Republican leadership to work with the President during an impeachment trial would be a "subversion of constitutional order."
"The Constitution prescribes a special oath for the senators when they sit as a trial in impeachment. They have to pledge to do impartial justice, and here you have the majority leader of the Senate, in effect, the foreman of the jury, saying they're going to work hand and glove with the defense attorney," Nadler said Sunday during an interview with ABC's "This Week."
Under the Constitution, it's up to the House to charge the President with impeachment, and the Senate to convict or acquit -- making senators, including McConnell, the de facto jury.
CNN previously reported that McConnell and White House counsel Pat Cipollone discussed plans to coordinate a strategy for an impeachment trial in the Senate during closed-door meetings last week.
While speaking in Frankfort, Kentucky, on Friday, McConnell pointed to Senate Democrats coordinating with then-President Bill Clinton during his impeachment proceedings as precedent.
"It was done during the Clinton impeachment as well," he said. "Not surprisingly, President Clinton and the Democrats in the Senate were coordinating their strategy. We're on the same side."

'I am not trying to pretend to be a fair juror'

Graham said he will do everything in his power to quickly end the probable Senate impeachment trial in a string of striking comments this weekend.
"This thing will come to the Senate, and it will die quickly, and I will do everything I can to make it die quickly," the South Carolina Republican said Saturday in an interview with CNN's Becky Anderson at the Doha Forum in Qatar.
When asked if it was appropriate for him to be voicing his opinion before impeachment reaches the Senate, Graham replied, "Well, I must think so because I'm doing it."
"I am trying to give a pretty clear signal I have made up my mind. I'm not trying to pretend to be a fair juror here," Graham said, adding, "What I see coming, happening today is just a partisan nonsense."

Five aides to Van Drew resigned on Sunday as the lawmaker prepares to switch to the Republican Party, according to a signed resignation letter obtained by CNN.
The aides -- Javier Gamboa, Edward Kaczmarski, Justin M. O'Leary, Mackenzie Lucas and Caroline Wood -- wrote in the letter that they can "no longer in good conscience continue our service in the Congressman's employ."
"We greatly appreciate the opportunities that the Congressman has given us, and we are proud of the work we've done together on behalf of the people of New Jersey's Second Congressional District," the letter said. "Sadly, Congressman Van Drew's decision to join the ranks of the Republican Party led by (President) Donald Trump does not align with the values we brought to this job when we joined his office."
The resignations come as Van Drew has told colleagues of his intentions to switch parties, according to two sources.
Remember: Van Drew was one of just two Democrats who in October voted against formalizing the impeachment inquiry, and announced earlier this month that he would vote against all articles of impeachment on the House floor.
While his party switch is a symbolic boost for Trump, the move is unlikely to change the outcome of the full House vote.

A new poll from Fox News finds 50% of voters nationwide want Trump impeached and removed from office, unchanged since a late-October poll.
Another 4% say Trump should be impeached but not removed, and 41% oppose impeachment altogether.
Some notable findings in the poll from CNN's Jennifer Agiesta:
Trump tweeted Sunday that Fox News polls are "always inaccurate" and "heavily weighted toward Dems" without providing any evidence for his assertions.

Need a refresher on what happened when?
Here are some key documents CNN has annotated that are worth revisiting as the week gets underway: