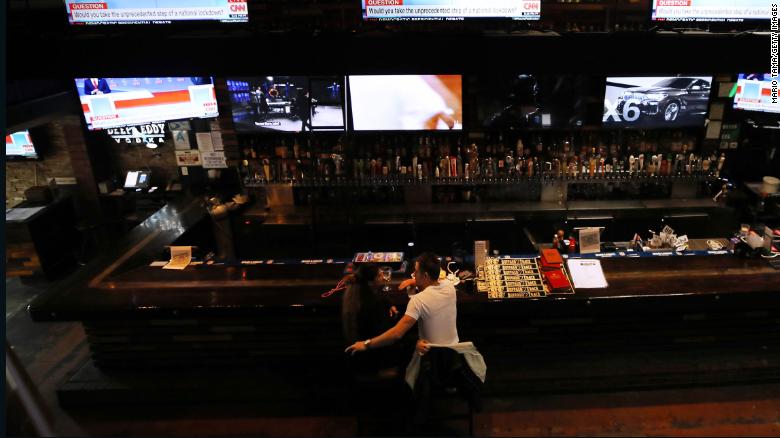 Washington (CNN)No one is beyond the novel coronavirus' reach: From social-distancing measures to virtual lockdowns, the current crisis demands that, whenever possible, Americans stay home.

But while the global pandemic is leaving no one untouched, it's affecting us in different ways -- including by forcing some groups to reimagine how to maintain a sense of kinship at a moment when in-person gatherings are all but impossible.
Already, the toll that the virus has inflicted on America's public areas is unmissable.
Even before states began ordering residents to stay home in recent days, cities including New York and Los Angeles had made moves to contain the rapidly spreading virus by closing all their bars and restaurants, except for delivery and takeout; Broadway also had decided that this is one time when the show mustn't go on. And after initially just shrinking their seating capacities, AMC and Regal, the country's two largest cinema chains, ultimately shut down all their US locations.
In certain situations, however, the requirement to self-quarantine has had a particular sting in its tail. That's in part because, for a number of Americans, congregating isn't only a means of entertainment or socializing -- it also provides a distinct sort of communal succor.
Take the centrality of gathering in numerous religious traditions, including Catholicism, Islam and some Jewish practices. Over the past few weeks, many houses of worship across the country have canceled their live services. That's no small thing, considering that people often seek out the comfort of religion during crises, looking for connection as fear permeates the world around them. (There's also a technical dilemma: How do you reproduce, say, church music -- group expressions of faith, essentially -- without a congregation or choir?)

Yet the disruptions have revealed little pockets of ingenuity.
"We still come together, but we've modified our togetherness," the Rev. Amos Brown told CNN.
Since 1976, the civil rights-minded Brown has been the pastor of San Francisco's predominantly black Third Baptist Church -- which was founded in 1852 and was the first black Baptist church west of the Rocky Mountains. Established in response to the inveterate racism in the area, the church has long been a pillar of San Francisco's black community.
As with many places of worship, Brown said that he and his congregation have turned to technology "to stay in touch with one another in spirit and in truth," especially since California Gov. Gavin Newsom issued a stay-at-home executive order last week. Brown described how, using only a skeletal ministerial staff, Third Baptist Church is livestreaming sermons and music; it also has a robocall system that's always in operation and it's maintaining its food bank services.
"We're still being a visible institution and a nation within a nation -- making a way out of no way," Brown said. "That's always been the profile of the black church in this country."
Other kinds of de facto community centers are attempting to chart paths forward, too.
Zachary Clark, the executive director of 826 National's Washington branch, an educational nonprofit organization that works largely with minority and low-income students from ages 6 to 18, described some of the challenges brought on by the virus.
"We're about amplifying youth voices by creating community between them and authors," Clark explained. "Writing can aid us in handling anxiety -- it's a comfort and an escape. The students who came into our after-school program as the news about the virus intensified, they were nervous. They were afraid. They were uncertain. And they wanted facts. Writing is an opportunity to get to those facts."
He continued: "This requires a lot of in-person work, which we do in DC schools in all eight wards and in our writing class in Columbia Heights. But because we follow DC Public Schools and DCPS announced that all its schools will be closed through April 24, that means that our programs also are on pause for the time being."
In light of the closures, Clark said that 826DC has had to be nimble and adaptive in order to continue distributing resources to students -- many of whom might desperately need the help, given that the pandemic will likely only supercharge educational inequity.
"One of the benefits of writing is that it's a practice that you can take on your own if you have to," Clark explained. "We're checking in regularly with our students, making sure that they have writing packets and prerecorded workshops. In addition, our staff members are working remotely to turn some students' work into professional publications."
He emphasized that his chief ambition is for the organization to meet students where they are -- figuratively speaking, of course.
"Whenever it is that we're on the other side of all this, students will need more than ever high-quality educational programs that are in line with their social, emotional and academic needs," Clark said.

The social-isolation measures that have been taken to curb the virus have dealt a devastating blow to other sustenance-providing spaces as well, even if the impact hasn't been as obvious to mainstream observers.
For decades, gay bars have been the lifeblood of LGBTQ communities -- functioning both as sites of activism and as portals of possibility for people hoping to make sense of their identities in the face of hostile realities. As former President Barack Obama described such gathering places in the aftermath of the Pulse nightclub shooting in 2016: "(It) is more than a nightclub -- it is a place of solidarity and empowerment where people have come together to raise awareness, to speak their minds, and to advocate for their civil rights."
Nicci B., the co-owner of The Back Door, a queer bar in Bloomington, Indiana, where on Monday Gov. Eric Holcomb instructed residents to " hunker down" via a stay-at-home executive order, underscored just how unprecedented the situation is.
"In past times (of distress), there was consolation in being able to physically come together. Two instances I'm thinking of are the moments following the Pulse massacre and President Donald Trump's 2016 election," Nicci told CNN. "Historically, joining in physical solidarity has meant so much. But now we don't have that."
(Does that sentiment sound familiar? There's a reason that some refer to such establishments as " the gay church.")
On top of stabilizing their hard-hit service-industry employees through a variety of crowdfunding platforms, some gay bars are maintaining a semblance of connectedness by encouraging their artists to take the show to newly homebound fans and patrons.
Rachel Ryan, the co-owner and business operations manager of The Stud, a San Francisco gay bar that opened in 1966 and is known for its mesmerizing drag shows, described what this transition has looked like.
"Last Friday, a group of drag queens" -- a handful of them hometown Stud girls -- "debuted ' Digital Drag: An Online Drag Show' using the video game streaming website Twitch," Ryan said. "About 10,000 people tuned in. It was hilarious. The performers used bedsheets and home lighting in their apartments. And as each queen did her number, her Venmo information was on the screen so that viewers could tip as if they were at an actual show."
Ryan added: "It's interesting to tap into a national conversation -- a wider notion of community -- through platforms we hadn't used before."
Are the aforementioned course corrections perfect replacements for in-person gatherings? Hardly. For some groups in particular, there's a special feeling of belonging -- of purpose -- forged through human contact, and it can't be replicated just by putting everything online or working from a distance.
Still, these early efforts at least do something to fight against the impulse to fall into pessimism in these bleak, almost anarchic times.
Or as Nicci put it: "The present moment has created a sense of despair that many people haven't dealt with before. But we're all learning new lessons in empathy for our fellow people and the communities they belong to."