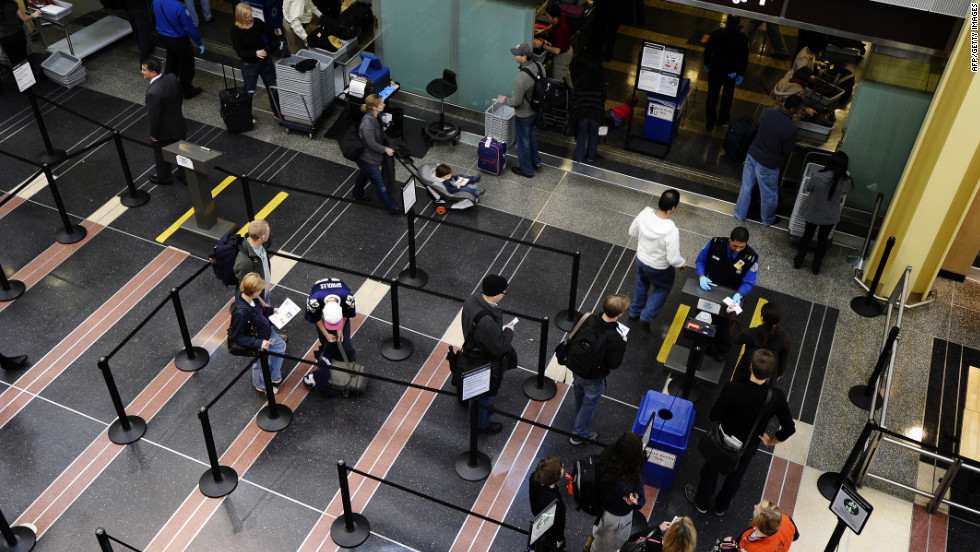 Travelers go through a Transportation Security Administration (TSA) to make their flights at Reagan National Airport in Washington, DC, on November 24, 2010 ahead of Thanksgiving Day. Some 42.2 million Americans are expected to pack their bags and travel at least 50 miles (90 kilometers) from home to celebrate Thanksgiving, which falls on the fourth Thursday of November, the AAA motor club and leisure travel group said. The number of Thanksgiving travelers is up by 11 percent compared to last year, even though gasoline is around 25 cents more expensive and air fares are up. AFP PHOTO/Jewel Samad (Photo credit should read JEWEL SAMAD/AFP/Getty Images)

Washington (CNN)Acting Homeland Security Secretary Chad Wolf on Wednesday raised concerns that not all states will meet the October 1 deadline to issue REAL ID driver's licenses to residents, telling lawmakers that he may request a legislative fix to assist the process.

All 50 states are compliant with the REAL ID Act security requirements, but some states are not yet issuing the updated identifications, Wolf said at a House Appropriations Committee hearing.
"The prospect of them being able to issue all of their constituents in that particular state a REAL ID by October 2020 is probably fairly small," he said, adding that "unfortunately" only about 35% of IDs that are in circulation are Real IDs. "That's a relatively low number as we look towards October 2020," he said.
Starting this fall, travelers will be required to have a "REAL ID-compliant" driver's license, US passport, US military ID or other acceptable identification to fly within the United States.
RELATED: Most Americans will need a new ID to fly, starting in October
Oregon and Oklahoma, the two states not providing REAL IDs, will start issuing them soon, according to DHS.
The acting secretary raised the prospect that the department may ask Congress for legislative relief to the post-9/11 law, which requires minimum security standards for licenses and prevents the federal government from accepting IDs that don't comply. Wolf said the law was "very prescriptive" and did not take into account future technological advances, like smartphones.
Last week, the department announced it would allow state agencies to accept identity documents online in an effort to speed up the process of issuing the REAL IDs.
Wolf said the department was taking steps to inform the public about the upcoming change, including posting information at the airport and having TSA officers remind travelers about the change when they present a non-REAL ID.
REAL ID cards are marked with a star at the top of the card.
"Individuals that are wanting to fly commercially in October 2020 need to have a Real ID," Wolf said.
Wolf reinforced the deadline, reminding states that they have had 14 years to make the necessary changes. "We believe that's enough time," he said.