Washington (CNN)The White House is in the midst of a sharp dispute with Senate Democrats over the amount of money needed to address the threat of the novel coronavirus, even as federal health officials warn that it's no longer a matter of "if" but "when" the US will have to grapple with a growing number of cases.

The funding dispute, along with the growing threat the virus poses, has lawmakers in both parties questioning President Donald Trump's messaging on the issue and his administration's ability to contain the expanding outbreak.
Senate Minority Leader Chuck Schumer's $8.5 billion emergency funding proposal is significantly higher than the $2.5 billion request submitted by the administration, and the number has drawn ire from Republicans, who argue that the New York Democrat has injected politics into an area that Republicans and Democrats could have negotiated themselves.
"Nothing is out of the ballpark, but it's not a serious effort. If he was serious about it, he would have proposed it some time ago. He waited to see what the President would do and then threw something out there," said Rep. Tom Cole of Oklahoma, a Republican appropriator.
But even as Republican and Democratic congressional aides predict the gap on the funding level will be bridged -- in a bipartisan manner -- somewhere in the middle, the simmering frustration over how the White House has addressed a crisis that has infected thousands and spread to multiple countries has been on display in briefings, hearings and public statements throughout the week.
Concerns range from public health threats to economic damage, from the breakdown and availability of virus test kits and the production of needed surgical masks to the health of global manufacturing supply chains. That lack of preparedness, along with concerns that Trump himself has not been on message at a time when the public is relying on correct information, has led to palpable frustration on Capitol Hill.
For weeks, lawmakers have warned the administration, publicly and privately, that a more robust response from the White House is needed to address the fallout, aides say. The perception, particularly among Democrats, is that any requests for information are viewed by administration officials as political attacks and rejected out of hand.

The level of distrust between the White House and Democrats has been years in the making, with Democrats repeatedly citing proposed budget cuts to the agencies leading the response to the effort -- none of which were enacted -- as well as personnel shifts that were viewed as explicit efforts to limit the streamlined processes that have proved effective to addressing a potential pandemic. 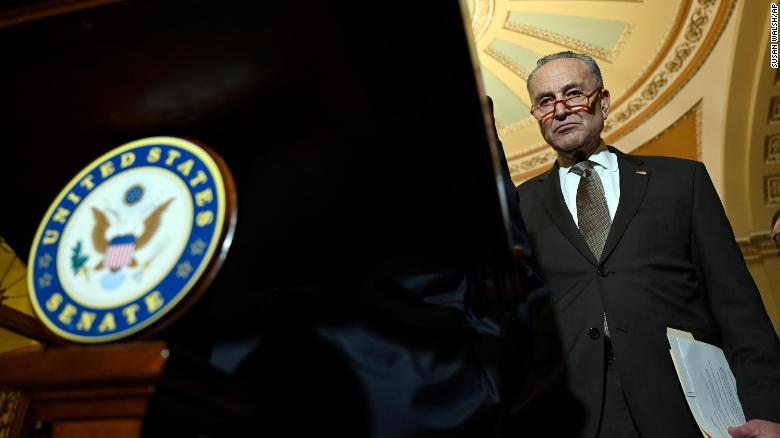 Senate Minority Leader Sen. Chuck Schumer listens during a news conference on Capitol Hill in Washington, Tuesday, Feb. 25, 2020.
"Decisions were made on politics and optics, rather than the informed opinion of our doctors and scientists," Schumer said.
But the distrust has been exacerbated by stark differences in the sobering information coming directly from public health experts at agencies like the Department of Health and Human Services and the Centers for Disease Control and Prevention versus the tone struck by the President.
While Trump tweets that his administration is doing "a GREAT job" in response to the coronavirus and top White House economic officials give rosy assessments about containment, lawmakers have sat through closed-door briefings and hearings with top health officials that include ominous warnings about its likely inevitable spread inside the US.
Even close allies have warned, if gently, that the administration needs to be forthcoming about how it shares information with lawmakers.
"Responding to this particular effort not only takes a rapid response, but if we're going to be your partners in this it takes a lot of sharing of information," Sen. Roy Blunt of Missouri, a member of GOP leadership, told HHS Secretary Alex Azar at a hearing this week. "Broad authority also includes broad responsibility to be forthcoming with information."
Blunt, who will play a leading role in shaping how much money Congress provides the administration to fight the coronavirus, told CNN after the hearing that his comments were more a reflection of the constant tension between administrations and Congress over sharing information, noting it's "always a challenge" regardless of who is in office.

The White House has argued that its response has been aggressive and fulsome, with travel restrictions and quarantine procedures put into place, a task force helmed by Azar and, at least to this point, more than a week without a new case of the virus cropping up in the US. 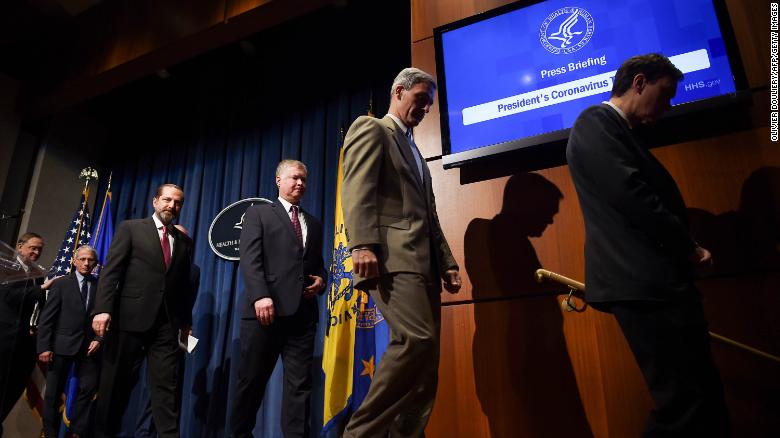 Health and Human Services Secretary Alex Azar (3L) flanked by other members of the President's Coronavirus Task Force, leave after a press conference.
Despite public denials, White House officials have privately weighed appointing a czar to oversee the administration's response to the outbreak. Trump has privately expressed frustration with Azar, who has taken the lead on coordinating the response so far, and is accusing the secretary of not keeping him updated enough, sources tell CNN.
After the market tumbled early this week, Trump questioned whether Azar was up to the challenge of handling the crisis.
The President and other administration officials have also directed their anger at Dr. Nancy Messonnier, the CDC official who has been a public face of the coronavirus response, for what officials claim is overly fatalistic messaging.
"We are asking the American public to work with us to prepare, in the expectation that this could be bad," she said at a news briefing this week. "It's not so much of a question of if this will happen anymore but rather more of a question of exactly when this will happen."

'You'll pay for it later'

Lawmakers in both parties told CNN of what they perceive to be a wide information gap.
It's in part, they acknowledge, a result of the fast-moving nature of the crisis -- while federal agencies have been responsive to member and staff requests, there are "just a lot of things they can't answer given how this thing is moving," a senior GOP aide told CNN.
State governments have also struggled to get timely information. Some weren't informed in advance of the January announcement that they would be home to one of the seven ports of entry where Chinese flights would be funneled in the wake of the outbreak, two people familiar with the matter told CNN.
State governments have asked for and, to this point, haven't received any details as to how they will be reimbursed for the expenses they are incurring as part of this federal response.
The administration's emergency funding request itself has been panned by Democrats as inadequate, and by Republicans who have warned it may be undershooting the real needs.
"If you lowball something like this, you'll pay for it later," Sen. Richard Shelby of Alabama, the powerful chairman of the Appropriations Committee, warned Azar on Tuesday. "I hope the administration will look at this as something they cannot afford to let get out of hand, period."
Shelby told reporters he was still working on a final topline number for the emergency funding, but "it will certainly be higher" than the Trump administration requested.
Even the documents that make up the request have been scoffed at, with a three-page letter and one-page line-item sheet making up the bulk of the request, a far cry from the nearly 30-page submission produced by the Obama administration as it attempted to secure funds to respond to the Ebola outbreak in 2014.
"It's a joke," one House Democratic lawmaker told CNN of the details included in the request.
That view has been echoed by Schumer, who has taken to hammering the administration daily for what he calls an inadequate response.
"The Trump administration has shown towering and dangerous incompetence when it comes to the coronavirus," said Schumer and he pressed his Democratic colleagues to apply pressure of their own to the administration.
Schumer walked through a six-page PowerPoint presentation in a closed-door meeting with Senate Democrats that starts with the slide: "The Trump administration has NO plan to stop the spread of the Coronavirus Pandemic."
Trump has fired back at Schumer at every turn, from a news conference in India to Twitter, all while presenting publicly that the administration has things well in hand.
The back and forth was, to some degree, a window into one thing that will always complicate matters for Democrats: President Trump.
"I don't think the President knows what he's talking about," Speaker Nancy Pelosi told reporters Wednesday. "Once again."